A couple weeks ago, I did a post about decorating sketchbooks covers, and asked you to send in some of yours. Check out the awesome responses: 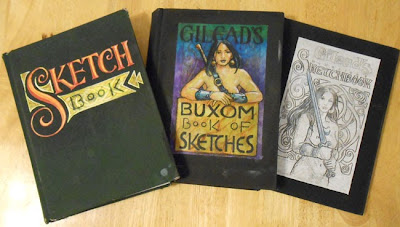 Gilead, who used to be a sign painter, says "I've kind of fallen out of the habit, but here's a couple from a few years ago. They're cloth covered 9 X 12" books. I did an under coat in flat white house paint and then used pens, charcoal and acrylics on top of that." 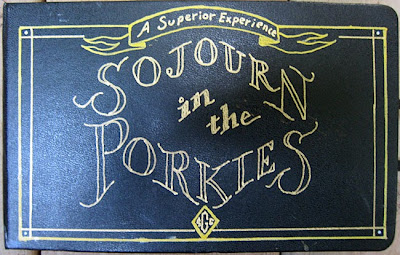 Steve Gilzow kept an illustrated journal when he had a residency in the Porcupine Mountains Wilderness State Park. He did the lettering with Sanford paint/gel pens, which he said did not stand up well to repeated handling.

Emma B explains how she did these numbered sketchbooks (VII, 8, 9, X):
"My process was to get a black and white drawing prepared, make a print of it at just above sketchbook size, then paint the back of the paper with rubber cement. After that, I'd cut most of the big parts with an Exact-o knive and put it on the cover of the sketchbook, where because of the rubber cement it adhered readily. Once the smaller parts were cut out and all parts to be painted were removed and rubber cement cleared off, I painted the stencils with a durable white primer spray paint...." 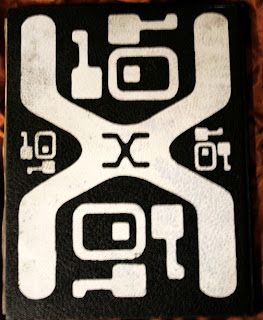 "...Remove the stencil, clear remaining rubber cement and they were ready to go. The only issue I had with this technique was that it was time consuming to do all the cutting, and that the bright white of the spray paint would tend to get a little dirty with heavy usage and daily handling. I started making loose outer covers of paper to throw away once the sketchbook was fully sketched in order to keep the cover designs clean." She says the "9INE" design was by Cody Tilson and the "10" design was by Chad Paulin. 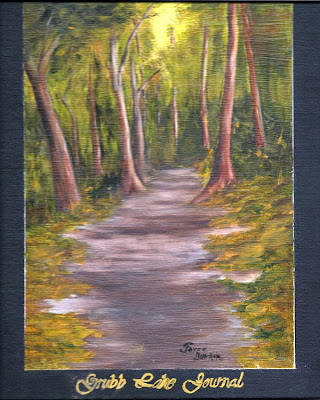 Finally, Joyce Durkin writes: "I use different sketchbooks for different subjects. I always had the notion to paint or decorate the covers and a few years ago I finally tried one. This sketchbook has a cloth cover, so I was able to use oil paints on it. I used masking tape around the edges, applied a few coats of gesso, painted a scene, and then varnished it. I used a metallic pen for the title."
------
Previously: Titles on Sketchbook Covers
You have just read the article entitled Your sketchbook covers. Please read the article from Sentimental Journey About http://sentimental--journey.blogspot.com/2013/07/your-sketchbook-covers.html