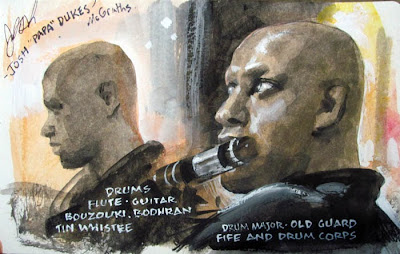 On Friday night at a pub in East Durham, New York I painted Josh "Papa" Dukes as he played traditional Irish music with the band called "The Yanks."
In his other life, Joshua Dukes is also a Master Sergeant in the U.S. Army and a drum major in the Old Guard Fife and Drum Corps, the official escort to the President. (He's at the center of this video) 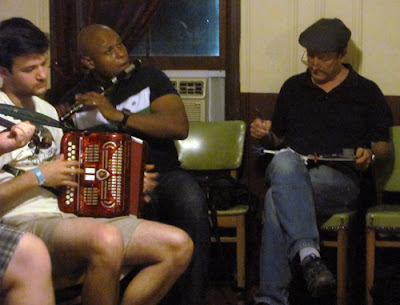 My perspective was pretty close up, since my seat was right beside him. My sketchbook, watercolor paints, water cup, rag, and casein paints are all in my lap. That's my son Dan playing accordion on the far left.

I had one failed start, which you can see below in the center of Step 1. This is a lay-in of someone else that didn't work out because my subject moved to another pose. No problem--I just shifted gears, wetted out the lines, and dove into the new portrait, painting over the other one.

When Josh switched from flute to bouzouki, I started a second sketch, since the pose was so different.

I was using watercolor and water-soluble colored pencils for the warm colors, and casein for the white and black. Most of this painting is transparent, but casein gave me opacity where I needed it. Most of the painting was done with a very large sable watercolor brush. The whole study took about 45 minutes.
-----
Bio of Joshua Dukes
Fife and Drum Corps
The Yanks Band
Previously: Dan, Accordion
You have just read the article entitled Joshua Dukes, Musician. Please read the article from Sentimental Journey About Portraits more. And you can also bookmark this page with the URL : http://sentimental--journey.blogspot.com/2013/07/joshua-dukes-musician.html