Portraits at the Zoo

(Direct link to video) I arrived at the Bronx Zoo early yesterday to do some watercolor portraits. I had no luck with the mandrills, who were too hyper, so I moved on to the gorillas. 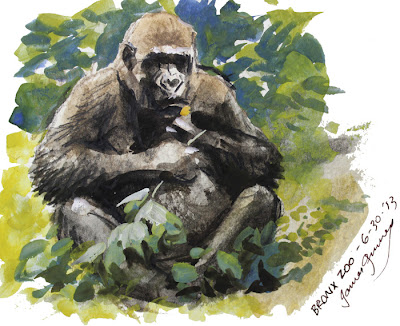 One of the females came down to pick up big handfulls of carrots that were scattered in front of the window. I couldn't interest her in what I was doing. She shyly tried to disguise herself with a leafy branch as she grabbed the carrots. The she went halfway back in the enclosure to enjoy her breakfast, where I hoped she would hold still for a while. 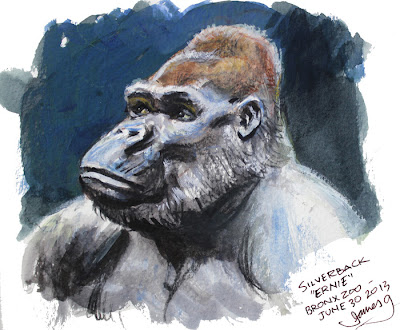 The big silverback male was named Ernie. He coolly surveyed the people watching him, and then he looked up to the side. I was so impressed with the powerful forms of his head as I sketched him in watercolor, gouache, and watercolor pencils. 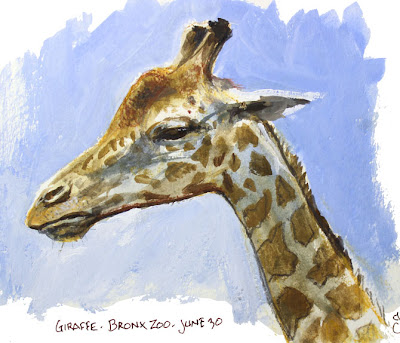 There was a giraffe standing quite still in the indoor enclosure. In the video you can see how I laid in the background with the opaque gouache mixed with ultramarine blue watercolor to get a smooth tone.
----
Media: Watercolor Pocket Set, watercolor pencils

, and various sizes of flat watercolor brushes.
Bronx Zoo (also called Wildlife Conservation Society)
Previously: Gorilla Portraits
You have just read the article entitled Portraits at the Zoo. Please read the article from Sentimental Journey About Animals , Watercolor Painting more. And you can also bookmark this page with the URL : http://sentimental--journey.blogspot.com/2013/07/portraits-at-zoo.html