Pterosaurs dominated the skies during the time of the dinosaurs. They were remarkably diverse creatures, from the size of a sparrow to giants as tall as a giraffe, and were by far the largest creatures ever to fly. 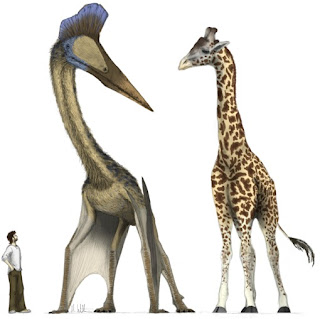 One of the tallest subgroups, known as the azhdarchids, stood as tall as giraffes.

Yet surprisingly, the scientific story of pterosaur anatomy, ecology, and extinction has not been told as thoroughly as has that of the dinosaurs.

A new book called Pterosaurs: Natural History, Evolution, Anatomy helps to fill the gap. It is published by Princeton University Press, the same publisher that produced The Unfeathered Bird by Katrina van Grouw

Mr. Witton is the ideal person to write such a book. He combines his deep knowledge of the subject as a paleontologist at the University of Portsmouth (U.K.) with his skills as an artist, and he has a flair for informal but accurate writing. His 292-page book is the most comprehensive and authoritative book to come along since Peter Wellnhofer's classic Illustrated Encyclopedia of Pterosaurs 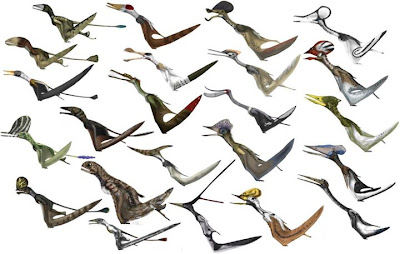 The book contains about 200 illustrations, mostly in color. Typically Witton portrays each type in a side-view flying position at the bottom of the flap cylce. In most cases the color restoration is accompanied by a line drawing of the reconstructed skeleton in the same pose. There are also many fossil photographs, maps, diagrams, and full-environment restorations.

Witton's book covers general topics first, such as what we know and don't know about the skeletons, soft tissues, coloration, aerodynamics and behaviors. He then covers more than 130 species group by group, including many recently discovered and beautifully preserved specimens. The back of the book has a very thorough list of references and an index for deeper reading.
----
Find out more:
Amazon: Mark Witton's new book Pterosaurs: Natural History, Evolution, Anatomy

Facebook page for the book
Princeton University Press webpage
.
You have just read the article entitled Book Review: Pterosaurs by Mark Witton. Please read the article from Sentimental Journey About Book reviews , Dinosaurs more. And you can also bookmark this page with the URL : http://sentimental--journey.blogspot.com/2013/07/book-review-pterosaurs-by-mark-witton.html