Book Review: The Art of the Salon 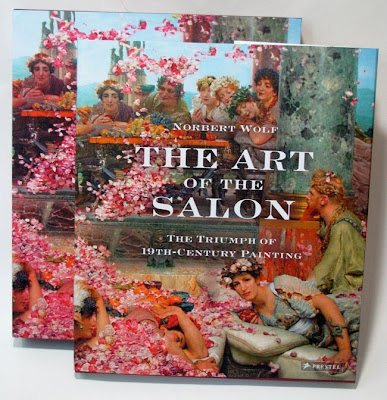 A recently published book called the The Art of the Salon: The Triumph of 19th-Century Painting

is a lavish and visually impressive production which fills a long-neglected gap on the art history bookshelf. 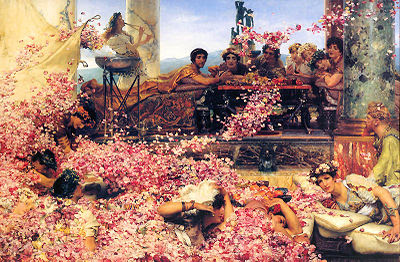 The book is a very large slipcased hardcover featuring the painting The Roses of Heliogabalus (above) by Lawrence Alma Tadema on the cover. The book is 288 pages and measures 14 x 12 inches, weighing in at more than 7.5 pounds, making it the ultimate coffee table book. It's so big it will hardly fit on a regular bookshelf. 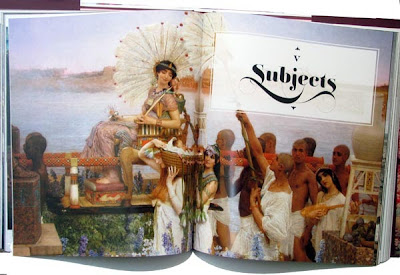 The scope of the book is ambitious, too. It not only includes the French Salon tradition, but also samples of Victorian painting, works from the American Hudson River School, and some pieces from Eastern Europe.

The introduction discusses the causes of the recent revival of interest in Salon painting and compares the spectacle of many 19th century epic history paintings to the popular appetite for extravagant Hollywood movies.

The 230 color reproductions include masterpieces not only by acknowledged masters such as Bouguereau, Gerome, Waterhouse, Leighton, but also by many other deserving but lesser-known painters, such as Morelli, Cormon, and Makart. The size of the reproductions ranges from generous double page spreads to small images the size of postcards or even business cards, but on balance, compared to many other recent books, the pictures are ample in scale. There's so much more detail in a good printed reproduction than most internet images.
The book examines Paris as a cultural capital, the business of the Salon exhibitions, and the spread of academic training around the world. Most of the second half of the book is organized thematically, with subjects such as national history, the "West-Eastern Divan," and "Between Sensuality and Prudery."
Unfortunately, the writing style is difficult to understand. This may have been partly the consequence of the translation from the original German. For example, here's a sample sentence, pulled out at random: "The description of the everyday, indeed of the trivial, and not seldom also the grotesque and satirical, the ugly and the lowly does not tolerate stylization (for example an antiquizing body position, dramatic gestures, selected accessories as expressions of dignity) or formal and compositional idealizing (for example a classical, friezelike arrangement of figures, a hierarchical frontality and so on)."
Compared to more readable and informative accounts of salon painting by people like Barbara Weinberg

the book misses an opportunity to lay out the simple facts and stories about Salon painting in straightforward language. Nevertheless, the book is a welcome addition to the library of any fan of academic painting, and browsing it is a rich visual feast.
----
Norbert Wolf: The Art of the Salon: The Triumph of 19th-Century Painting

by Prestel Publishing
Two other excellent books on the subject:
Barbara Weinberg: The Lure of Paris: Nineteenth-Century American Painters and Their French Teachers

You have just read the article entitled Book Review: The Art of the Salon. Please read the article from Sentimental Journey About Academic Painters , Book reviews more. And you can also bookmark this page with the URL : http://sentimental--journey.blogspot.com/2013/07/book-review-art-of-salon.html