Before reproducing photographs became efficient and practical, newspapers relied on artists to make visual reports, and this job tested their memory. Many of the painters who later became part of the Ashcan School, such as John Sloan and William Glackens, served this apprenticeship. 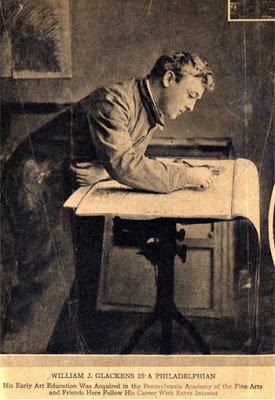 In the book Painters of the Ashcan School: The Immortal Eight

, Bennard Perlman describes the games that newspaper sketch artists played: "Constantly confronted with the task of sharpening their sponge-like minds in order to absorb and store details of every possible variety, the artists repeatedly tested one another, using the routines they had discovered in Lecoq de Boisbaudran's book, Training of the Memory in Art." 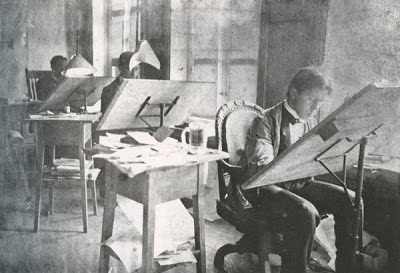 Frederick Gruger
"'Glack, I'll give you five minutes to go into that room and tell us what's on the west wall,' Shinn would challenge. When time was up Glackens emerged, ready to astound his colleagues by systematically rattling off even the most minutely detailed objects. 'Guess how many steps there are from here to there?' one of the group demanded. 'How many tables are in the next room?' Again and again an observant Glackens quietly uttered the answers with consistent accuracy, a feat which gained him the title 'the photographic mind most likely to succeed.'" 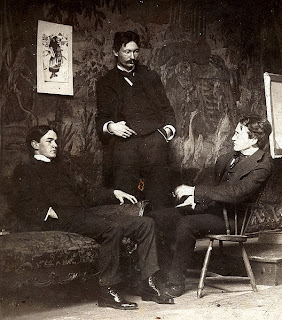 Above: Everett Shinn, Robert Henri, John Sloan
"Often the artist-reporters would congregate outside of the Press to engage in another favorite pastime, that of walking behind a stranger in an effort to observe the characteristics of his movement. Camera-like eyes would register the shuffle of trousers, the swing of an arm, or the twist and turn of a body — a memory test which served as a practical study of anatomy."

"For the newspaper artists, these spare-time diversions were great sport, like 'college days, all the fun and no examinations,' as John Sloan once put it. But they also represented a remarkable schooling for men who would spend the rest of their lives recording, first on paper, then on canvas, the realities of the everyday American scene.
------
From the book: Painters of the Ashcan School: The Immortal Eight

by Darren Rousar
Free digital book of the French classic "The Training of Memory in Art and the Education of the Artist" by Père Lecoq
Illustration Art blog: "A Week of Gruger"
You have just read the article entitled Memory Games of Artist-Reporters. Please read the article from Sentimental Journey About Golden Age Illustration more. And you can also bookmark this page with the URL : http://sentimental--journey.blogspot.com/2013/07/memory-games-of-artist-reporters.html