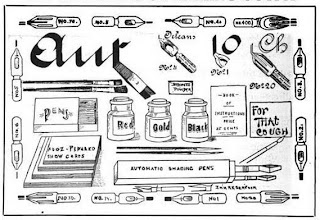 Show card writing can be done with pens. In fact the Speedball line of pens was invented for show card work. 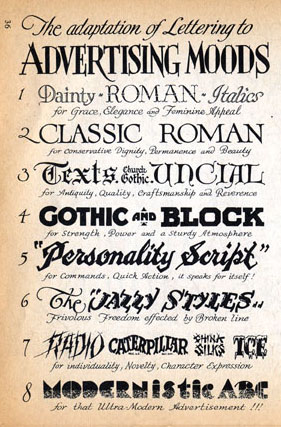 If you're not familiar with them, Speedball pen nibs are still being made

. They are detachable nibs made with a variety of flat, square, round, and oval tips of various sizes for lettering. They fit into a pen holder

and dip into black or colored ink. In high school, I lettered a lot of wedding invitations and menus for print shops, so I practically had these nibs attached to my fingertips. 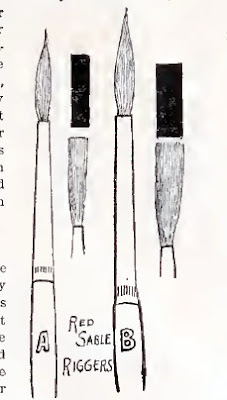 But most of the professional show card writers of the golden age used rigger brushes. These are long sable brushes with round ferrules. Their tips can be flattened out to make a stroke of even width in the pull direction, and a thin stroke when moved sideways. Used properly, this tool can make most of the letterforms with a single stroke. As far as I'm aware, modern rigger brushes aren't the same as the old show card riggers; most of the modern riggers are intended more for painting thin lines.
In show card work, the letters were not outlined and filled in. That would be too slow. Even a hundred years ago, a writer had to produce a lot of work at very low pay rates. "Quantity first," said William Hugh Gordon (though his quality was the best, too). 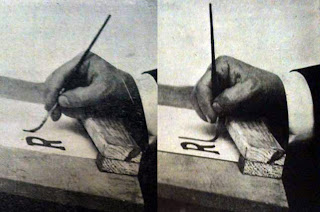 A rigger is held between the thumb and first finger in such a way that the brush could be rotated during a stroke. That turn of the brush is necessary to make the "Gothic" and "Block" letterforms shown earlier. You can wrap the ferrule with waxed string to improve the grip. The fingertips should be held far down the ferrule—some held it even closer to the brush tip than the example above.

The brush is pulled toward the writer with a movement of the fingers, as Charles Strong demonstrated above in his book. Strong uses a bridge, but other writers balanced their hand on their last two fingers and did away with the hand rest. 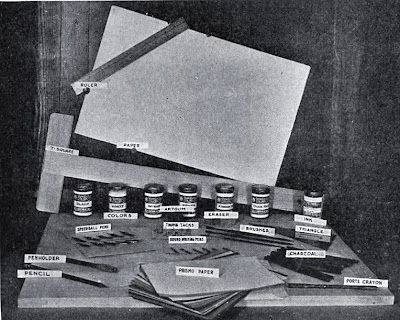 Here's a student setup, from Blair.

The paint was water-based and often prepared from dry pigments by the artist. The best white came by grinding white lead—a potentially toxic practice. The binder was mucilage

, a plant glue also used as a wallpaper paste, a paper glue, and a gum for envelopes. You can still get that too, but I haven't experimented with it as a paint binder. You can substitute tube gouache and get good results. 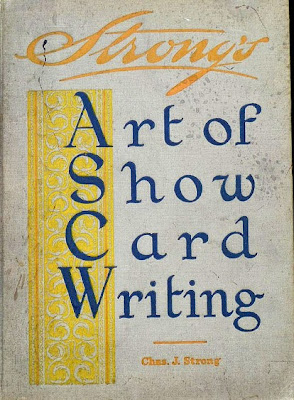 There are many vintage books on the subject, and you can get downloads for free from Google Books and Archive.org. Here are some of the titles and authors I would recommend:

Tomorrow I'll finish up with a little introduction to some of the alphabets
----
Resources on Amazon:
Speedball 10 Pen Nib Assorted Set