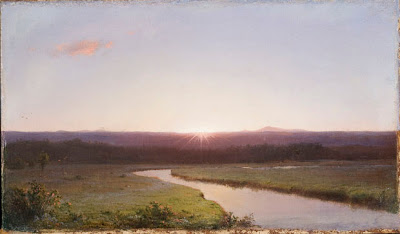 We cherish light at its most fleeting moments, especially during sunrise and sunset. No one captured these effects more compellingly than Frederic Church (American 1826-1900). 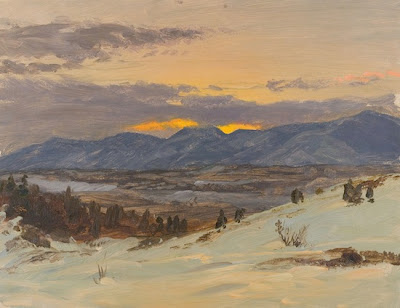 This one shows the view from his home Olana, as the last winter light shines through a break of clouds over the Catskill mountains. 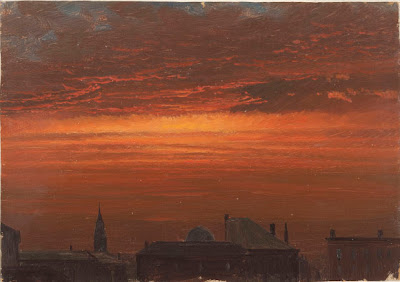 This view of Hudson, New York at sunset shows the clouds underlit, an effect so fleeting that to paint it requires both anticipation and memory. You have to set up the painting in anticipation that that kind of effect is coming, and then finish it later from recollection. This was before color photography, so only artists could capture it. 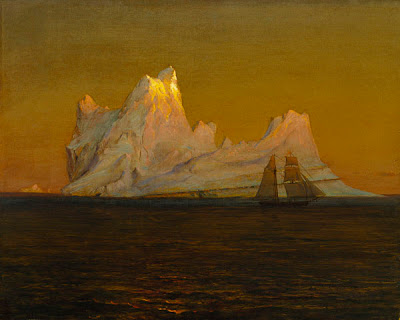 Church famously hired a vessel for an expedition to Arctic waters to sketch icebergs. Despite seasickness and other setbacks, he managed to produce a series of memorable studies.

In addition to the exhibition opening in June that I mentioned recently, there's another museum show currently up in London that features Church's landscape oil sketches. The show has about 30 small works, together with the large finished canvas Niagara from the American Side are part of Frederic Church and the Landscape Oil Sketch, at the National Gallery in London. The exhibit will continue through April 28 and then travel to Scotland.
Book: Frederic Church and the Landscape Oil Sketch

Wikipedia visual list of Church's works.
You have just read the article entitled Frederic Church's fleeting light. Please read the article from Sentimental Journey About Hudson River School , Plein Air Painting more. And you can also bookmark this page with the URL : http://sentimental--journey.blogspot.com/2013/04/frederic-church-fleeting-light.html