The second annual Plein Air convention is coming up in less than a week in Monterey, California. I will be giving the kick-off speech on Wednesday. 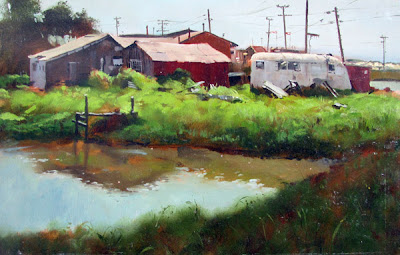 It will be an interesting return for me because I did an oil painting on location there over 30 years ago, before they called it "plein air painting."
I found a painting spot in Moss Landing by a stillwater lagoon looking across to a set of old shacks. As I worked, an old woman in a flowered dress came out of the trailer, and hobbled over to me. She looked at my painting, and a faraway look came over her face. She said that author John Steinbeck used to come by here, and said that Mack and the Boys from his novel Cannery Row were real people who stayed in the very shacks I was painting. 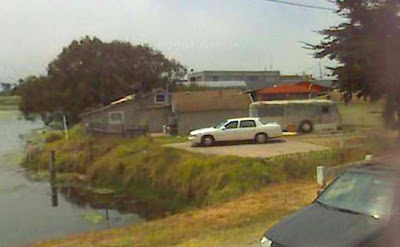 I have a feeling the place has changed a bit since then, (Edit: I found the spot via Google Street View, and 30 years later, they've still got the same shacks and the same trailer). But I'll still be hunting around for interesting stories to document with my oils and watercolors, and I'll be inviting guests of the convention to join me on the hunt.
Here's the Plein Air Convention website. The event is mostly sold out, but I hear they're saving out a few places for walk-ins.
You have just read the article entitled Returning to Moss Landing. Please read the article from Sentimental Journey About Plein Air Painting more. And you can also bookmark this page with the URL : http://sentimental--journey.blogspot.com/2013/04/returning-to-moss-landing.html