The creepy art of Zdzisław Beksiński


Polish-born painter Zdzisław Beksiński (1929-2005) once said, "I wish to paint in such a manner as if I were photographing dreams." Despite the fact that he was raised in the rubble of World War II, and suffered personal tragedies, such as the suicide of his son, he was said to be a pleasant and humorous man. 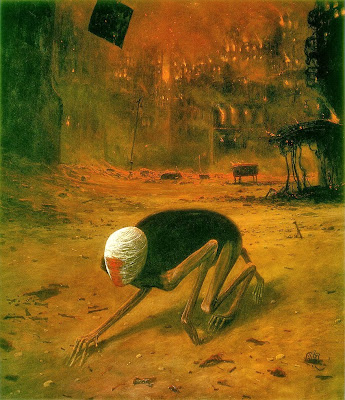 He didn't frequent museums, was too shy to attend his own gallery openings, and didn't take inspiration from movies. He said his inspiration came from classical music, which he always had playing when he worked.
He didn't put titles on his paintings, because he didn't want them to be misinterpreted. Although most people find his work disturbing, he believed his work was optimistic or even humorous. Unfortunately he was savagely murdered in his old age.
----
For more images, see Zdzisław Beksiński's terrifying visions of Hell.
Wikipedia on Zdzisław Beksiński
Virtual gallery of his paintings
via Lazer Horse
You have just read the article entitled The creepy art of Zdzisław Beksiński. Please read the article from Sentimental Journey About http://sentimental--journey.blogspot.com/2013/12/the-creepy-art-of-zdzisaw-beksinski.html