Jean-François Raffaëlli (1850 – 1924) was a French realist artist who painted portraits of the ragpickers. 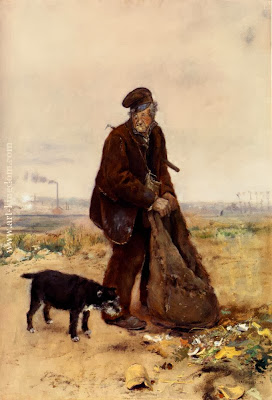 Ragpickers, also called "rag and bone men" or "chiffoniers" in French, collected scraps of discarded cloth, bones, metal and and other unwanted refuse from the streets of Paris. They lived in a northern district of the city and worked at night.

They carried a large bag or a basket on their backs. In one hand they carried a cane-like stick with a sharp pointed end, and in the other they held a lantern.

According to Shirley Fox, a young art student in Paris, "The appearance of some of these birds of the night, as they flitted about from place to place, was most picturesque. Some of them were withered and wrinkled old men and women who looked more like animated mummies than human beings." 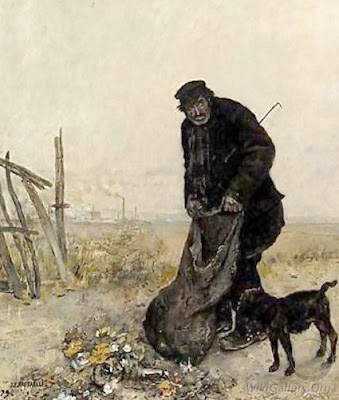 Citizens would throw garbage out their window onto the streets, and the rag pickers would sort through it, taking anything they could resell.

The rags were a raw material for making quality paper. Bones were used for knife handles and toys, and the grease taken out of them was used for making soap. 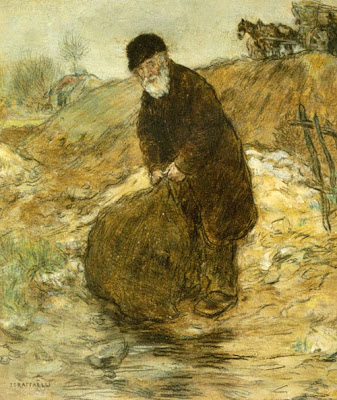 Painting such poor people was a preoccupation of some of the realist painters. 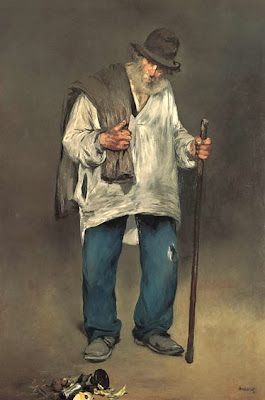 Eduoard Manet painted a chiffonier. Whether such subjects were worthy for art divided the painters who came to be known as Impressionists, some of whom were sympathetic to such commonplace subjects. Others wished to exclude them from exhibitions. 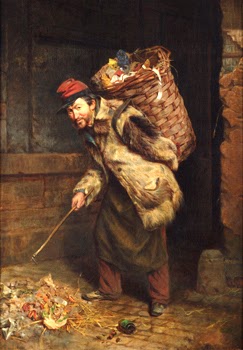 The American painter Thomas Waterson Wood (1823-1903) also painted a ragpicker.
Striving to improve sanitation in France, an 1883 law required people to throw their trash into receptacles, which the ragpickers were allowed to dump out and sort through.

But these arrangements eventually changed the habits of the ragpickers, who were replaced by the more familiar garbage collectors and recycling men of our own era.
You have just read the article entitled Raffaëlli's Ragpickers. Please read the article from Sentimental Journey About http://sentimental--journey.blogspot.com/2013/12/raffaelli-ragpickers.html