Plein-air painting in the nude 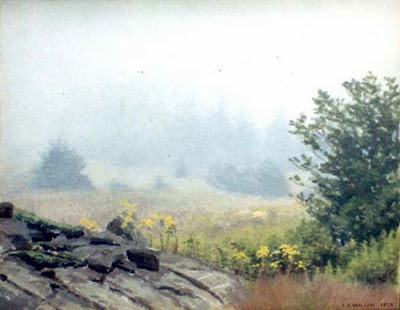 OK, by popular request, here's the story of James Perry Wilson painting in the nude:

"Wilson was irrepressible. There are several accounts of his penchant for nudity. This was not a lewd or sexual activity for Wilson, he grew up in the 'Fresh Air' generation where getting outdoors and sunbathing was associated with health. He may have been encouraged by his mother to get outdoors and soak up sunshine given the amount of life-threatening and mortal sickness experienced directly in his family. His interpretation of how to soak up sunshine may not have been the same as his mother's, but the pairing of plein air painting and healthful sunbathing was probably shared and encouraged."

"Fred Scherer recounts that they were painting together in a secluded area when he looked over and found Wilson to be totally naked. At some point later that day, Fred noticed two women on horseback coming up over the hill. He whistled to alert Wilson, who reached down, whipped his pants up, and continued painting as if nothing had happened."