skip to main | skip to sidebar
Home » Unlabelled » Questions about Black, Part 3 of 4

Questions about Black, Part 3 of 4

In yesterday's post, we explored the whys and hows of mixing your own black. But there are still a lot of unanswered questions about black. 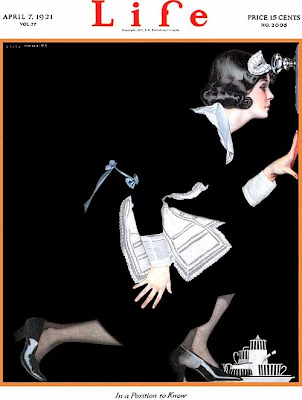 Do some kinds of artists use black more than others?
Yes. Designers, cover artists, comic artists, and poster designers use black a lot because of its simple graphic power. Above is a cover by Coles Phillips (1880-1927), which uses black as a clever design element. 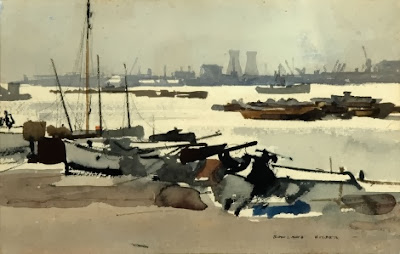 Why? So should landscape painters take black off the palette?
Well, I'm not one to make hard and fast rules, because there are always exceptions. There have been artists who have used black effectively in landscape. Rowland Hilder (1905-1993) did the watercolor above. He often started with black ink, and I think it works well for him here. Andrew Wyeth also used black effectively, because he was after a starkness and melancholy and absoluteness that black was perfectly suited for.
The reason a lot of landscape painters in oil leave black off the palette is to remind them that there is illuminated atmosphere between them and everything in the scene. Our eyes can trick us into thinking that an open window across the street is pitch black, when really it's shifted up from black quite a bit. You can see this by holding up a lens cap or some other shaded black object next to the thing you think is black in the landscape. I think it's reasonable to say that beginning landscape painters in oil should have a lot of experience painting without black—or for that matter without brown—until they know they can mix any color they see from a set of highly chromatic "primary" pigments.
What are the pros and cons of using a note of pure black in the painting?
The reason you might need black on your palette is that it will give you just a little extra punch. If I'm doing a realistic painting, I work under the philosophy that black should be reserved for rare and special parts of the picture. I mentioned this in a post called "The Separateness of Black."
I tend to agree with John Ruskin. He said in his book "The Elements of Drawing:" "You must make the black conspicuous. However small a point of black may be, it ought to catch the eye, otherwise your work is too heavy in the shadow. All the ordinary shadows should be of some colour,— never black, nor approaching black, they should be evidently and always of a luminous nature, and the black should look strange among them; never occurring except in a black object, or in small points indicative of intense shade in the very centre of masses of shadow." 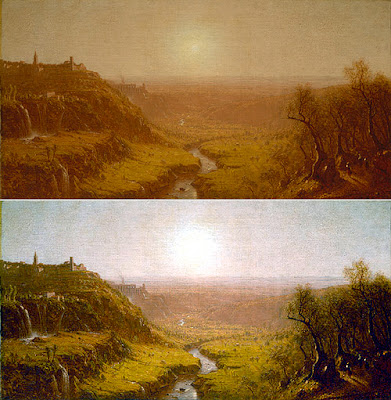 If I might add to that, I would say that pure white or pure black can destroy the subjective color atmosphere of a scheme, like pressing the auto white balance on a camera, or pressing the "Auto Levels" button in Photoshop. Above is a Sanford Gifford landscape with its subjective warm gamut intact. Note that its lights stay clear of pure white and its darks stay clear of black. Below is the same painting given the auto levels treatment, which harms the poetic effect. Perhaps that's one reason why Rubens said, "It is very dangerous to use white and black."
How can one get the purest black?
Pure, absolute black is beyond the reach of any single pigment. The darkest value you can get with a surface is probably black velvet. 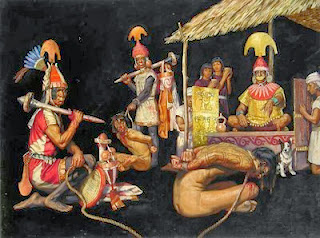 Any black pigment reflects a certain amount of light, depending on how it's painted, how it's varnished and how it's lit. The black passages in my painting of Moche prisoners for National Geographic, above, reflect a fair amount of light, even though they're painted with pure ivory black. That's just because of the brushstroke textures are giving off a lot of diffuse reflection.

Some artists achieve very dark blackish colors by glazing, sometimes by glazes of different colors laid over each other in a single passage. If it's varnished and lit correctly, this method for achieving dark colors can yield very rich and mysterious darks. 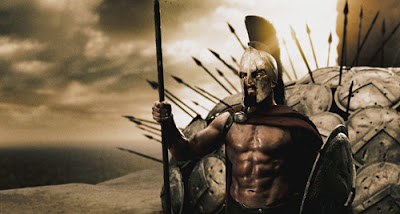 What is meant by “crushing blacks?”
Crushing black is a technique of digital color adjustment in photography, film, and video where you clip off the low end of the histogram to add contrast, simplicity, or a "comic book" look (300, above). It's very popular in modern movies. National Geographic has done this with its photos for decades, so much so that photographers from other magazines joke derisively about "National Geographic Black." 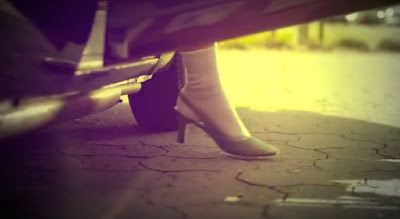 But you can also crush the blacks and then raise them into a color range to add a faded film, or "Instagram" look, which is also stylish right now. The still above is from a demo reel by Sunday Studio. This effect can easily be achieved in a painting as well.

Is black a color?
Whew, I'm too tired to answer that right now. Let me extend one more day and answer it tomorrow. If you have another question about black, ask in the comments, and I'll try to get to it tomorrow.

"Questions about Black" Series
Part 1: Using black to darken a color
Part 2: Mixing your own black
Part 3: Using black in a painting
Part 4: Is Black a color?
Get my book "Color and Light" signed from my website or from Amazon

.
You have just read the article entitled Questions about Black, Part 3 of 4. Please read the article from Sentimental Journey About http://sentimental--journey.blogspot.com/2013/12/questions-about-black-part-3-of-4.html