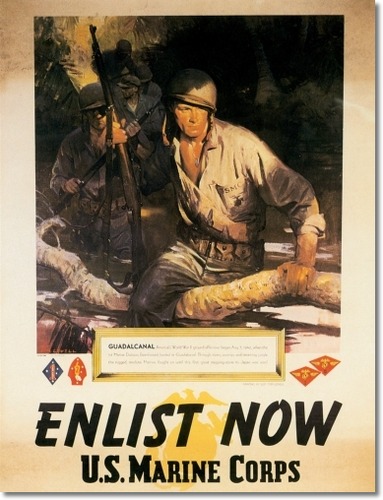 In 1944, illustrator Tom Lovell (1909-1997) joined the U.S. Marines with the hope that he would be assigned as a combat artist. He ended up serving for two years as a sergeant and staff artist for the Leatherneck Magazine, a publication of U.S. Marines. 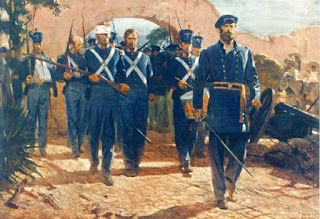 Among the many paintings he did were historical reconstructions, such as General Quitman's 1847 entry into Mexico City with a battalion of Marines. 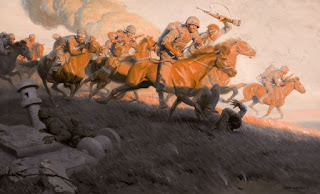 ....and a charge of soldiers on horseback... 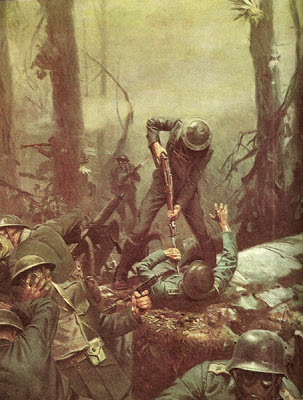 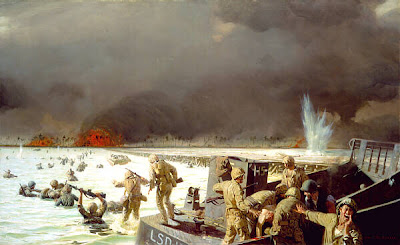 Lovell painted the landing at the Battle of Tarawa (US code name Operation Galvanic) in the Gilbert Islands, in the Pacific Theater of World War Two. The original is in the USMC Marine Corps Combat Art Collection. 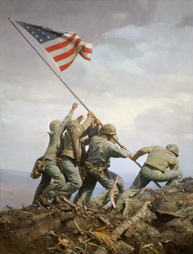 Finally, Lovell recreated in paint the moment captured by Joe Rosenthal's famous photo at Iwo Jima.
-----
Book: The Art of Tom Lovell: An Invitation to History

The Wikipedia article for Lovell is just a stub. Would anyone care to write it? I'll help with info.
Sources: Tom Lovell papers at the Cowboy Hall of Fame in Oklahoma City
Jones, Byron B., "Stories of Survival: Tom Lovell" Southwest Art. May 1983, p. 66-83)
You have just read the article entitled Sergeant Tom Lovell, USMC. Please read the article from Sentimental Journey About Golden Age Illustration more. And you can also bookmark this page with the URL : http://sentimental--journey.blogspot.com/2013/05/sergeant-tom-lovell-usmc.html