skip to main | skip to sidebar
Home » Unlabelled » Invasion? Have a beer!

Invasion? Have a beer! 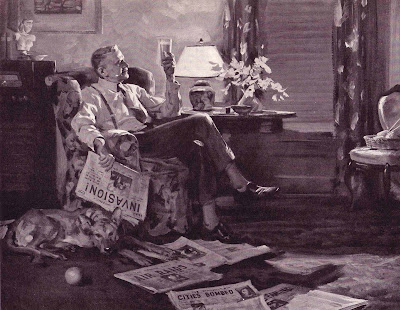 This illustration by Harry Anderson appeared in a magazine ad in 1941. The ad copy reads: "In a world of strife, there's peace in beer. In these bewildering times, where can a man turn to replenish the wells of his courage...to repair the walls of his faith?"

The beer industry in America had some big setbacks from Prohibition through the outset of World War II, so brewing companies banded together to promote beer's benefits. The history is summarized in a Wikipedia article "Beer in the United States."
Thanks, Jim Pinkoski.
You have just read the article entitled Invasion? Have a beer!. Please read the article from Sentimental Journey About http://sentimental--journey.blogspot.com/2013/05/invasion-have-beer.html