Solomon's "Equipped"--A study or a fragment?

In the studio sale after his death, a painting by Solomon Solomon (1860-1927) called "A Page Buckling on Armour" came up for sale. It sold again at auction in 2003 with the new title, "Study for Equipped." 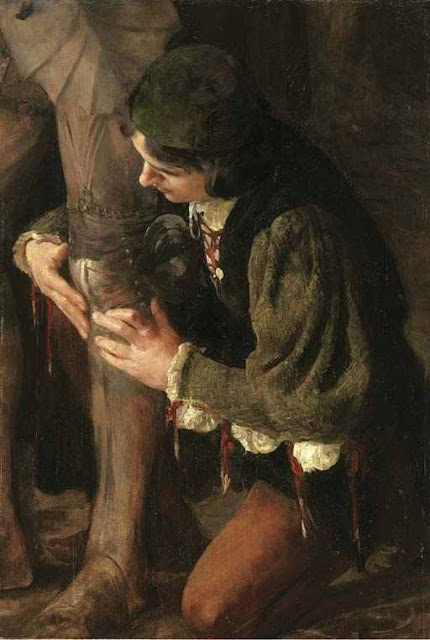 The painting shows a young man attaching armor to the leg of a knight. Solomon was a French-trained Royal Academician known for his portraits and his mythological scenes, and this painting shows his characteristic attention to classical craftsmanship, with fine foreshortening of the face, and sensitive drawing in the hands.
Christies noted that the 36 x 24 inch painting was a study for the large (84 x 48 in.) painting called "Equipped" that Solomon exhibited at the Royal Academy in 1900. 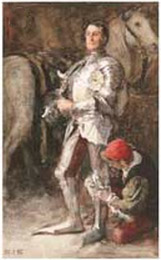 At the same auction in 2003, a small watercolor study was also sold, evidently a preliminary sketch showing the whole composition. The page can be seen in context preparing the knight for battle, with his white horse in the shadows behind him.
I was curious what the finished picture looked like, and found it in the book of the Royal Academy Pictures, 1900, plate 93 (left, below). 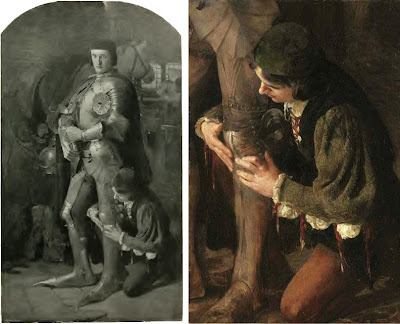 When you see the picture of the page next to the finished painting, it becomes clear that it's not a study at all, but a fragment, hacked out of the larger painting, which must now be lost. Presumably the surgery could have been conducted by the artist himself, or else it could have been done by someone else immediately following his death, but before the studio auction in 1928.

EDIT: I have added a file (below) with the page image overlaid semitransparently so you can see how the two images fit together. Note that the measurements (36 x 24 out of 84 x 48) line up too. I would guess Solomon or someone had a 36 x 24 frame to fill. A few people noticed some very slight differences, such as the position of the cape and the edge of the page's cap (light against the armor in one, and dark against the armor in another). I would suspect that this was the work of the artist touching up the fragment. But I suppose we'll never know for sure. 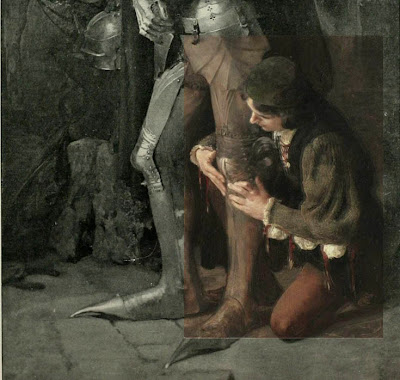 Book: "The Practice of Oil Painting and Drawing," by Solomon Solomon, Introduction by James Gurney

by Christopher Wood
Download the Royal Academy catalog of 1900
Christies 2003 sale of the oil fragment and the watercolor study
Solomon Solomon on Wikipedia
You have just read the article entitled Solomon's "Equipped"--A study or a fragment?. Please read the article from Sentimental Journey About Academic Painters more. And you can also bookmark this page with the URL : http://sentimental--journey.blogspot.com/2013/05/solomon-study-or-fragment.html