Designers of dragons and other mythological creatures might wonder how to draw the scale patterns on the head and body. How would the scales form on such an animal? 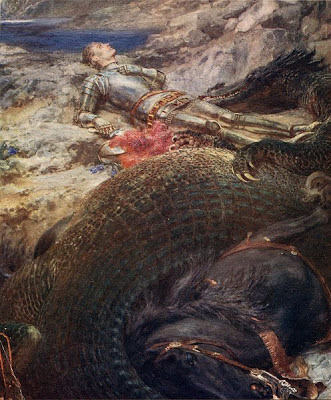 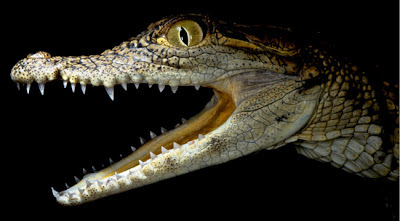 Dr. Michel Milinkovitch from the University of Geneva studied Nile crocodiles to understand the origin of their head scales. His study was published this year in Science magazine.
It turns out that reptilian scale patterns form in two different ways: genetic patterning and stress fractures. In the first system, the scales are developmental units that begin to form in embryonic stages and are usually symmetrical from one side of the head to another.

This is typical of snakes. The symmetrical pattern can be seen by overlaying the pattern from the right and left sides (the yellow and red line patterns at lower right). 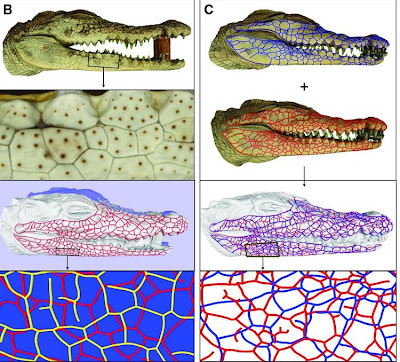 By contrast, crocodile head scales form by randomized stress fracturing, like cracks in auto safety glass. The scales are non-overlapping polygonal shapes that are smaller in areas where there is more flexing. There's no symmetrical alignment from one side to another of a single individual, nor is there a consistent pattern from one individual to another.
(Video link) Here's a video that explains the idea.

Scales on the rest of the body of the croc, unlike the head scales, follow the snake-like genetic patterning model.
Science Magazine Crocodile Head Scales Are Not Developmental Units But Emerge from Physical Cracking
Previously: Briton Riviere's Studio
You have just read the article entitled Formation of reptilian head scales . Please read the article from Sentimental Journey About Animals more. And you can also bookmark this page with the URL : http://sentimental--journey.blogspot.com/2013/05/formation-of-reptilian-head-scales.html