The exhibition of Anders Zorn at the Gardner Museum in Boston ends in just two days, on May 13. The show includes twenty-four paintings and twenty-two drawings, in addition to photographs and letters.

I went to see the show with a group of artist friends last week, and we were intrigued with several variations on a theme of passengers riding an omnibus. 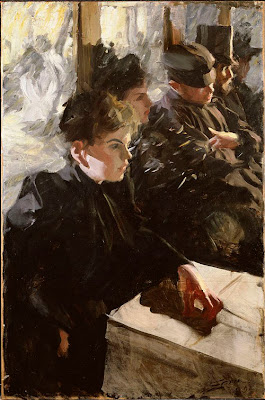 In one version, a young woman sits with her left hand clutching the string of a box as her fellow passengers doze or gaze out the windows. Outside it's a blur of action. Two contrasting light sources flood into the interior from the left and right. 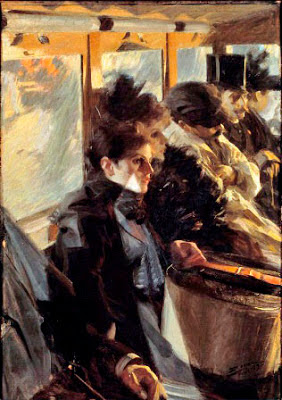 In another, larger version, a wealthier woman hooks her fingers through a red strap in a hatbox. This time a man's arm and hand fills the lower left. The same two side lights prevail as in the previous version. But now he adds a third light source, a bar of light from the viewer's position cutting boldly across the main figure. 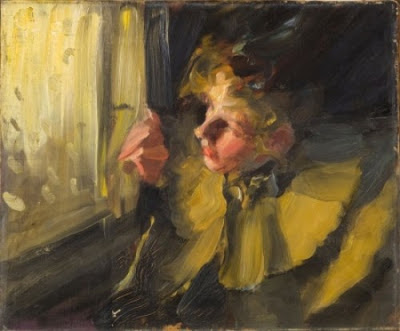 A smaller study shows a female omnibus rider peering out toward the light with a hand on the window.

A 'bus interior is an interesting subject for a painter, one that we can relate to now. It's an environment that mixes social classes, forcing strangers to sit together in the same space, while each is miles apart in his or her own thoughts.

Evidently all these paintings were based on visual impressions that Zorn experienced on location. Of course he couldn't have painted these fairly large canvases on the spot. My guess is that he sketched some small rapid notations in pencil or charcoal on location, committed details to memory, and then reconstructed the scene with models in the studio.

The challenge would have been to hold to the fleeting impression, and not be seduced by detail in the static posed model. The attention to soft edges and rapid paint handling in all three versions gives the effect of jostling movement and the fleeting effect of a moment glimpsed and recollected.
Book: ANDERS ZORN: A European Artist Seduces America

Anders Zorn Exhibition
You have just read the article entitled Anders Zorn's Omnibus Paintings. Please read the article from Sentimental Journey About Academic Painters more. And you can also bookmark this page with the URL : http://sentimental--journey.blogspot.com/2013/05/anders-zorn-omnibus-paintings.html