Many of Anders Zorn's early portraits are painted in watercolor. He was just 25 years old when he painted this one of Clarence Barker in 1885. 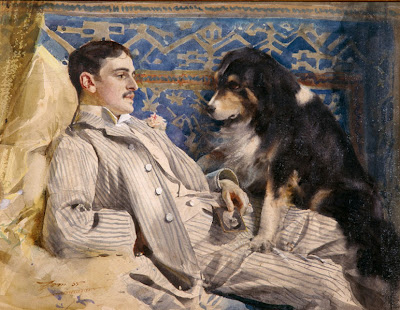 In a letter, Zorn explains the idea behind the portrait: Barker "reclines comfortably on the soft divan, having just spent time gazing at his sweetheart's portrait, and now he casts a tender glance at his dog who stands over him and looks him wonderingly in the eye. The painting could be called Rivals. I like to turn my portraits into paintings."

A large Zorn exhibition will come to the Legion of Honor in San Francisco in November, followed by the National Academy in New York.
Anders Zorn complete works online
Anders Zorn (1860-1920) on Wikipedia

You have just read the article entitled Anecdotal Portrait. Please read the article from Sentimental Journey About Portraits , Watercolor Painting more. And you can also bookmark this page with the URL : http://sentimental--journey.blogspot.com/2013/05/anecdotal-portrait.html