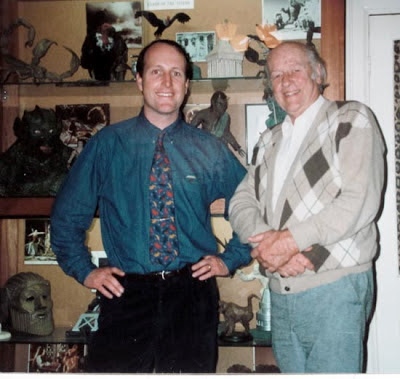 In 1993, I visited Ray, who invited me to his London home. On the top floor was his studio, which he jokingly called his “den of iniquty.” He showed me many of the original models from his classic films, which were gathered together like aging actors waiting to be called back onstage.
I was thrilled to see the Medusa from the 1981 picture Clash of the Titans. I remembered her menacing gaze, with the twelve snakes writhing on her head—each with a head and a tail, each one moving independently—and that’s not including her arms and her tail and the flickering firelight, all of which had to be controlled one frame at a time.
I asked Ray how he remembered where each snake was heading, how he kept track of all those separate elements. “How did you do it?” I asked.

He thought for a moment, closed his eyes, and smiled: “I just did it,” he said.
From my introduction to his book "A Century of Model Animation

."
New York Times Obituary
You have just read the article entitled Ray Harryhausen, 1920-2013. Please read the article from Sentimental Journey About Miniatures more. And you can also bookmark this page with the URL : http://sentimental--journey.blogspot.com/2013/05/ray-harryhausen-1920-2013.html