Samuel Gurney Cresswell (1827-1867) was the official ship's artist and Second Lieutenant aboard the HMS Investigator, during an expedition in search of the Northwest Passage. 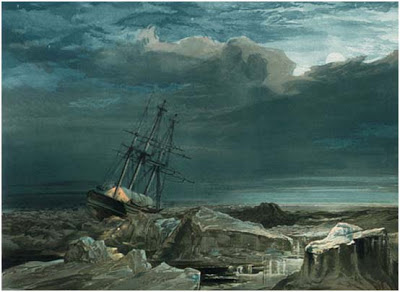 The Investigator was on a mission to find two other lost ships, HMS Erebus and HMS Terror from the ill-fated 1845-48 British Arctic Expedition commanded by Sir John Franklin. 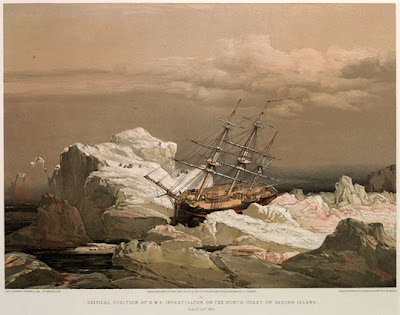 In 1853, the Investigator also became locked in ice. The sixty-nine man crew had no choice but to abandon ship. Samuel Gurney Creswell documented the expedition in watercolor, showing life on deck, the ship trapped in ice, and the eventual rescue.
His watercolors from the Investigator expedition were interpreted in a lithographic portfolio called "A Series of Eight Sketches in Colour," published in London in 1854.
The HMS Investigator has recently been discovered in the shallows of Mercy Bay by underwater archaeologists.
Samuel Gurney Creswell's story, including his encounter with pirates while serving in the seas off China, is told in the book: War, Ice and Piracy: The Remarkable Career of a Victorian Sailor

Samuel Gurney Cresswell on Wikipedia
Slideshow in Archaeology magazine online
The full story of the rescue of the crew of the Investigator
Thanks, David Gauldin
You have just read the article entitled Samuel Gurney Cresswell. Please read the article from Sentimental Journey About Watercolor Painting more. And you can also bookmark this page with the URL : http://sentimental--journey.blogspot.com/2013/05/samuel-gurney-cresswell.html