Richard in a Restaurant

A couple nights ago I was in Boston having supper with some artist friends. While we waited for the food to be served, I painted a portrait of Richard, who sat across from me under a down-facing spotlight. 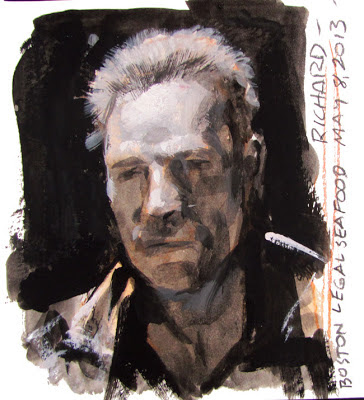 The light hit his forehead and nose, leaving the rest in shadow. Within the shadow, the bottom half of his face was lit from the light bouncing off the table. This lighting gave him a film noir look. He has chiseled features, with well defined planes, which makes him fun to draw. 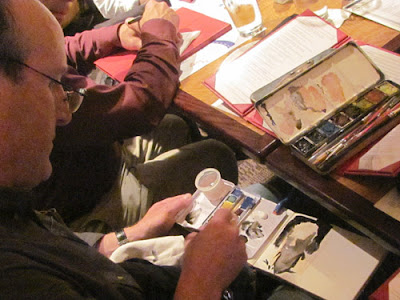 It was a fancy restaurant, and I had to be careful not to get my paint on the cloth napkins. To keep things simple, I limited the colors to black and white casein paints. Even though my transparent watercolors were open and available, I didn't use them. 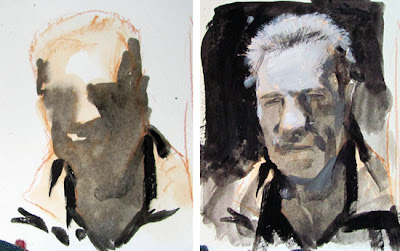 Two steps in the process.
1) I quickly sketched the main shapes with a red-brown watercolor pencil. Then I quickly massed in the shadow as a single tone.
2) I used darker values for the up-facing planes and the side planes within the shadow. 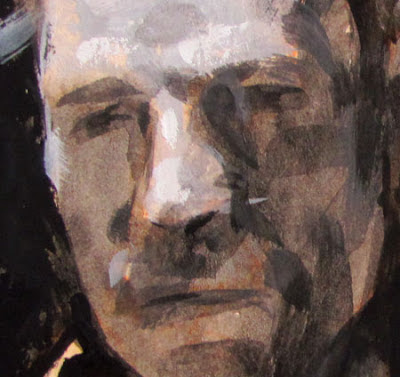 This detail of the final sketch is about an inch square. You can see how I was trying to group the values within the shadows according to planes. So for example, the side planes of the mouth barrel, the jaw, and the forehead received a darker tone. A little of that red-brown pencil shows through the shadow.

Right before the meal arrived, I went to the rest room to wash out my brush and palette.

You have just read the article entitled Richard in a Restaurant. Please read the article from Sentimental Journey About Casein Painting , Portraits more. And you can also bookmark this page with the URL : http://sentimental--journey.blogspot.com/2013/05/richard-in-restaurant.html