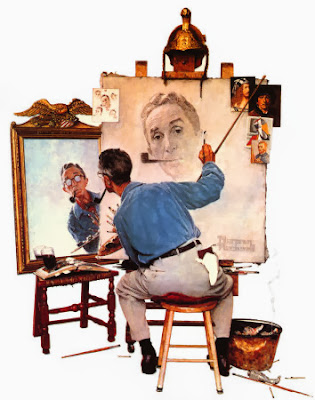 " in a 45 minute long interview on WAMC public radio.
Solomon's biography suggests that Rockwell's art was driven by feelings of pedophilia and homosexuality, and that his self-absorption led to the deaths of family members.

Thomas said that the biographer spent only two or three hours interviewing him in a diner and gave him no opportunity to respond about inaccuracies in the manuscript. This is unfortunate, as Thomas is the person who worked most closely with Rockwell on his famous autobiography

. "This is a huge literary snow job," he says.
N.R.'s granddaughter Abigail characterizes the book as "salacious lies in the guise of a well-researched book."
Wake Forest University professor Patrick Toner also dissects the book's portrayal of Rockwell and challenges Solomon's scholarship in his detailed online article "False Portrait." Toner says that Solomon's arguments "are deeply flawed, and she has a pronounced tendency to either distort or ignore evidence to the contrary of her claims."
I haven't read the book, but I read the biographical article that Ms. Solomon wrote in Smithsonian. Rather than being a humanizing portrait of Rockwell, I found it to be full of inaccuracies and innuendos, and I was surprised it got by Smithsonian magazine's fact-checkers.

I believe the Norman Rockwell Museum made a mistake in endorsing the book and hosting its launch. While it is laudable for the museum to provide a forum for a variety of views on Rockwell, it's also essential for them, as the nexus of Rockwell scholarship, to set the record straight when false or misleading claims are made about the man, especially when those claims have been uncritically accepted by the mainstream press. I hope the museum will make a statement clarifying its position and correcting the record.

• Amazon customer reviews of the book
You have just read the article entitled Rockwell Biography Criticized by Family. Please read the article from Sentimental Journey About Golden Age Illustration more. And you can also bookmark this page with the URL : http://sentimental--journey.blogspot.com/2013/12/rockwell-biography-criticized-by-family.html