There are about 70 faculty artists here at the Plein Air convention, each giving lectures and demonstrations. Some of the demos are conducted indoors on a stage, with giant screens projecting the work as the artists describe their process. 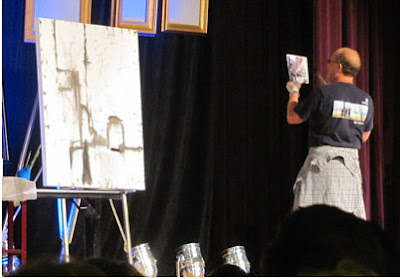 Ken Auster set up a canvas the size of a picture window. To establish the placement of elements, he held up a small photo directly in front of the large canvas, charged forward, and placed the landmark points that he held in short term memory.
For the remainder of the hour and a half demo he used big brushes and paint squeezed from a caulking gun, to create the oil cityscape you see below. 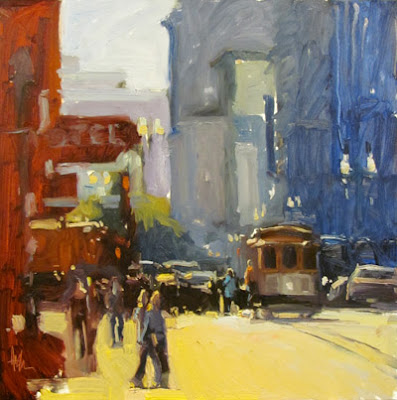 He expressed the importance of leaving all but the focal point broadly stated. "The part of the visual field that you see in focus is equal to the size of your thumb held at arm's length," he said. He compared an overly finished painting to a play with too many lead actors in it. 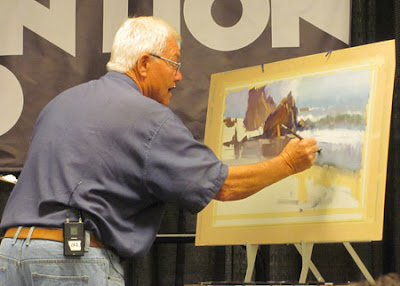 New Zealand artist John Crump demonstrated a surf scene in oil. "I tend not to be a
high key painter. I tend to paint in grays." He used a light touch with his bristle brushes, often feathering the strokes to give softness and atmosphere. 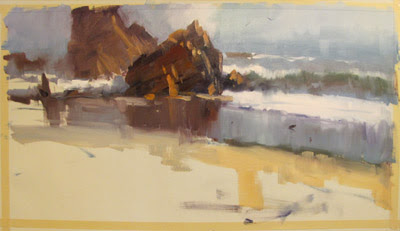 Crump established the dark masses of rock as large shapes and then added the light planes over them toward the end of his hour and a half-long demo. What you see above is a work in progress, and he seemed keen on putting more time into it. 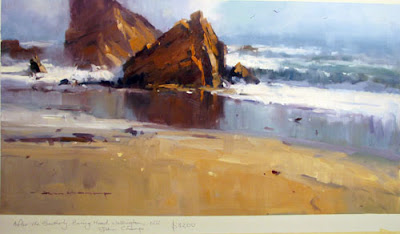 Edit: Here's the finish!
You have just read the article entitled Auster and Crump Demos. Please read the article from Sentimental Journey About Paint Technique more. And you can also bookmark this page with the URL : http://sentimental--journey.blogspot.com/2013/04/auster-and-crump-demos.html