On the last day of the Portrait Society’s annual convention, Vietnamese-born, Colorado-based Quang Ho treated an audience of over 500 attendees to a dazzling two-hour head study. 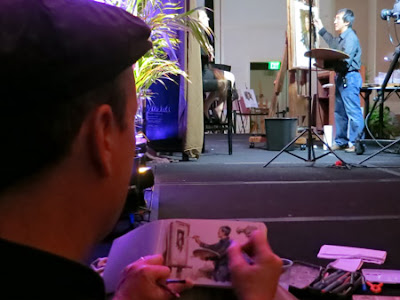 (Photo by Susan Voss)
I sat off to the side with my sketchbook on my knee. I wanted to capture Quang Ho’s confident stance and the big curve of his new palette. “I bought it because it looks so cool, really,” he said. 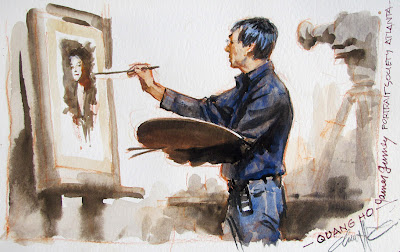 While he painted, he discussed everything from color to cosmology, interspersing profound musings with self-effacing jokes. 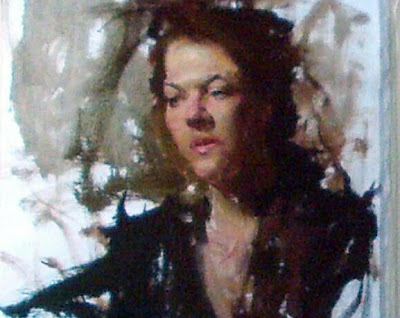 Quang Ho’s primary concern was to create interesting abstractions within the context of realism: “I’m not painting a person,” he said. “I’m painting the visual context, the setting in a given light. I’m reading the story of what the light is doing to the form.” 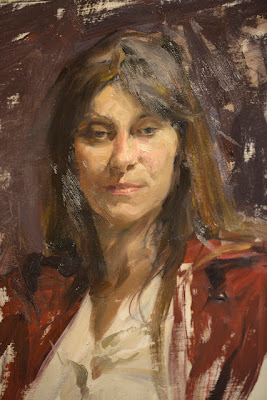 (Photo of Thursday's Face-Off painting)
He regarded the light mass of the picture as a single organism, with its own life and personality. The same is true with the dark mass or shadow. “[The art of] painting is how those two organisms come together,” he said. In any given painting, either the light or the shadow should dominate, but they should not be equal.
His first strokes were a wild but accurate frenzy of brushwork. The model’s pose and attitude emerged from a tangle of apparent randomness. He alternately advanced toward—and backed away from—the painting, repeatedly relating the part to the whole. “Painting goes at different speeds, like driving,” he said. If you only go fast all the time, you’ll get in a train wreck." 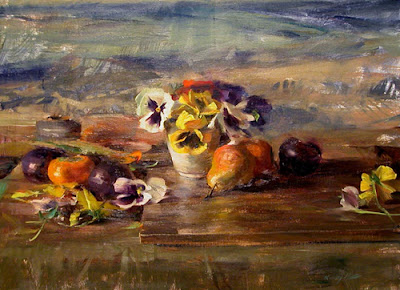 During the breaks he showed a gallery of images on the screen, starting with a microscopic array of diatoms and sand grains, followed by sweeping vistas of the solar system and distant galaxies. 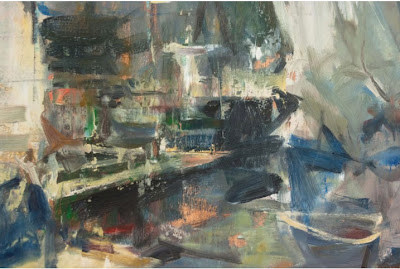 (Above: Detail of "Mizuna.")
He then zoomed into details of his own paintings, which he calls “internal structures.” As with self-similarity in fractals, he was conscious of creating interesting abstract compositions at both the micro and the macro scale. He made an effort to infuse even the negative areas of the pictures with painterly interest. 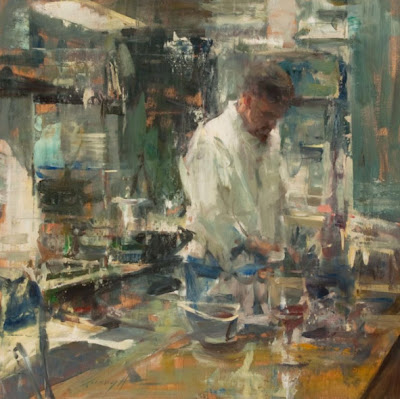 (Quang Ho, "Mizuna," 12x12 inches, from which the previous detail was extracted.)

In color mixing, he spoke most often about value. “If you’re not sure of the color, think only of the value,” he said. “Value is what is important. You can give me motor oil and I can paint with it.”
--------
Many thanks to Mr. Edward Jonas for inviting me to be a part of the convention, and to all the attendees for your kind words and welcome. 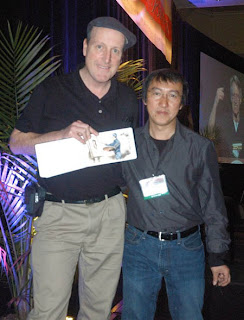