Before leaving the topic of show card writing, let's take a look at some alphabets. These were created by the show card writer William Hugh Gordon for his classic 1918 book Lettering for Commercial Purposes. 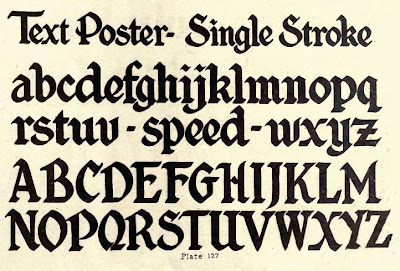 Each alphabet takes on the character of the tool that constructed it. These calligraphic letterforms were made with a broad, flat tipped tool held at a 45 degree angle. Such letters have been made by a reed pen, a quill pen, or a steel nib. But in this case he's using a rigger brush held at a 45 degrees.

Gordon classifies such an alphabet under the broad category "text" by which he means the old-style or thick-and-thin letters made through the centuries by normal writing instruments. 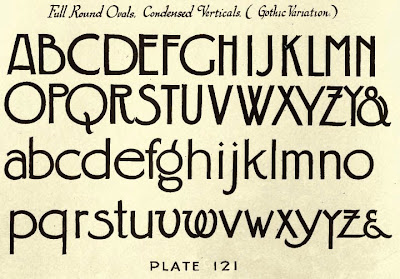 By rotating the rigger brush in the fingers, a writer can achieve a constant-width or "gothic" alphabet using single strokes. Note the fully open counters on the "o's," the high and low crossbars on the "F" and "A," and the narrow vertical letters, such as "H" and "N." These eccentricities were popular throughout the teens and '20s. 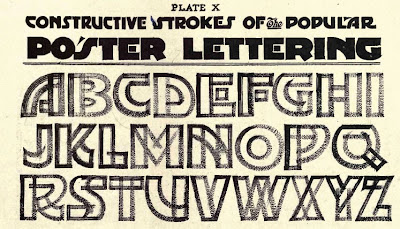 It takes multiple strokes of the brush to construct blocky letters, but in Gordon's hands, it's fast and even. 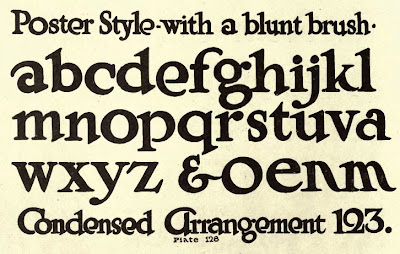 With a blunt-tipped brush or one of the Speedball oval nibs, you can get this fun poster style. This look is often associated with commercial graphics of the 1920s, such as that of F.G. Cooper

Finally, I would like to thank blog readers Rise of the Molecule and John Berkeley for letting me know about the following related videos.

..and John told me about this video about the traditional fairground lettering and decoration of Joby Carter.