Arrest of a Propagandist

The preliminary studies that led up to Ilya Repin's dramatic painting "Arrest of a Propagandist" show how changes in design can alter the staging and psychology of the story. 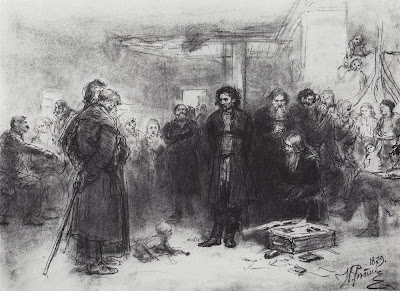 This charcoal study shows a young Russian dissident captured by the police. His hands are tied behind his back as the authorities search the house for illegal literature. One suitcase of such contraband lies open, with stuff scattered at his feet. A man at left with a lowered head seems to face him with hard questions. Members of his family or his village stream down the stairs at right. A baby plays at his feet. 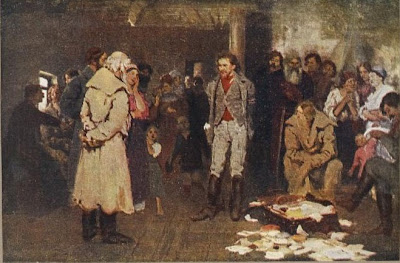 This small painted version develops that idea further. He takes away the bearded man's cane and makes him light against the dark background. A little girl clings to her mother's dress near the man. The light shapes and the bright red shirt attract attention to the right places. The composition seems like a "go," in fact Russia used this version as a stamp design. 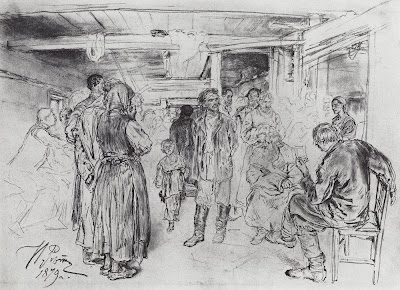 But like a stage director, Repin keeps trying more variations. In this study, his head turns to stage right to face an official, who sits with his legs crossed in a chair and reads aloud some of the forbidden writing. This is much more dramatic and powerful psychologically. A few sympathetic figures stand at stage left, but we can't really see their emotions, and they become overly important to the picture. 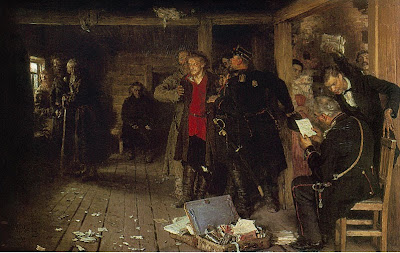 In the final state of the painting, Repin raises the stakes even higher. He removes all the sympathetic figures from the main room and crowds them in the back hallway at right. This deletion makes the accused man seem more isolated, more Christ-like, and his fate seems more dire. The men at the window look conspiratorial and guarded, while a menacing figure, like Judas, sits alone at the rear. One of these men must have been the informer, and the accused seems to be shooting a look their way.

Two men, including a uniformed guard with a weapon, work together to restrain him. The suitcase appears in the immediate foreground, packed with material, with scraps of something torn up on the floor at left. The seated official is an older man with glasses. 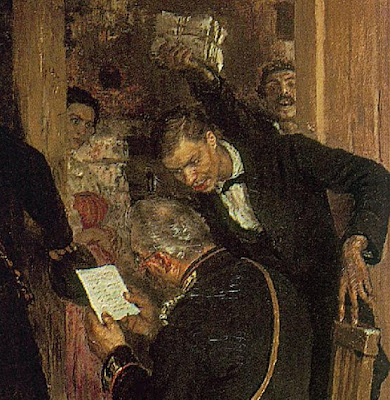 Next to him is a young official, perhaps a lawyer, his fingers delicately balanced on the chair back. Above him is an upraised hand with another bundle of captured papers.

In a storytelling picture like this, the designer is a dramatist on a par with a film director. Compositional choices should be driven by mood and meaning, not just as an exercise in abstract shapes or formal niceties.
You have just read the article entitled Arrest of a Propagandist. Please read the article from Sentimental Journey About Academic Painters more. And you can also bookmark this page with the URL : http://sentimental--journey.blogspot.com/2013/07/arrest-of-propagandist.html