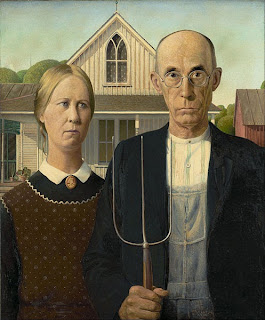 The models for Grant Wood's "American Gothic" were the artist's sister Nan and his dentist, Dr. Byron McKeeby. 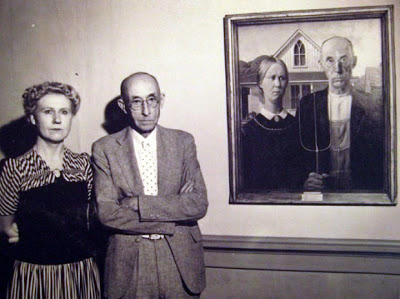 As the painting became more and more famous, his sister was embarrassed to be seen as the wife of someone twice her age, so she began telling people the painting portrayed a man and his daughter, a reading that Grant Wood confirmed.
The painting, which resides in the Art Institute of Chicago, has invited many parodies and commentaries, and has become something of a symbol of American life. In this video art historians Steven Zucker and Beth Harris explore the biography of the painter and the ambiguities of the image.
via Retronaut.
More about "American Gothic" on Wikipedia
American Gothic parody blog
You have just read the article entitled Models for American Gothic. Please read the article from Sentimental Journey About Models Posing more. And you can also bookmark this page with the URL : http://sentimental--journey.blogspot.com/2013/07/models-for-american-gothic.html