Why do artists prefer warm colors? 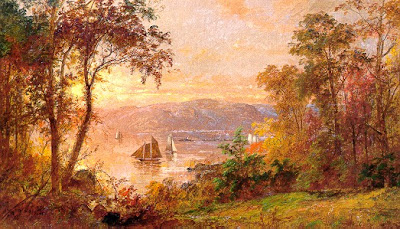 Here's a painting by Jasper Cropsey (1823-1900), who was known for his warm-tinted autumn landscapes. Cropsey's paintings in general tilted toward yellow and orange and red, and away from blue and green—even though blue and green predominate in the northeastern landscape most of the year 'round. 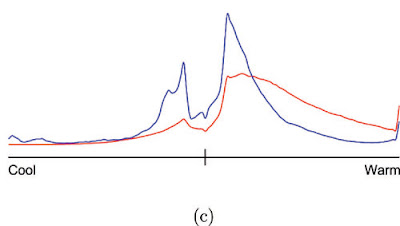 Cropsey was not alone among artists for warming his palette. A scientific study* compared the average warm/cool pixel distribution of random photographic images to average distributions among many artists' works, and the artists' color averages were distinctly warmer—much more yellow, orange and red, and much less blue and green than we see in nature.
Why is this so? Are we as humans hard-wired to prefer a warmer palette? Do those colors remind us of sun or fire or spiritual realms? William James, in his book "The Varieties of Religious Experience," interviewed many people about the moments in their lives when they felt uniquely inspired, full of mystic revelation. He noted that many of those visions were tinged with golden colors, as are the interiors of many churches. But that doesn't really answer the question—it just poses another.
Maybe some of you have ideas or anecdotes to shed some "golden light" on this discussion.
------
Wikipedia Jasper Cropsey (1823-1900)
*The chart is from a paper by Kun Zeng, Mingtian Zhao, Caiming Xiong, and Song-Chun Zhu.
You have just read the article entitled Why do artists prefer warm colors?. Please read the article from Sentimental Journey About Color more. And you can also bookmark this page with the URL : http://sentimental--journey.blogspot.com/2013/08/why-do-artists-prefer-warm-colors.html