Movie director Alfred Hitchcock articulated the following rule of filmmaking: "The size of an object in the frame should equal its importance in the story at that moment."


Orson Welles applied the Hitchcock Rule to the famous three-minute opening shot for his 1958 film "Touch of Evil" (video link). The first frame is filled with a ticking time bomb. Then the camera pulls way back to set the scene, and closes in on the main characters as they kiss...and then...well check it out.

Movie posters (and lobby cards) often follow the same basic rule, but in a poster the single image has to encompass the entire movie. The poster image needs to tell the viewer who are the main characters, and how much action, romance, or spectacle there's likely to be.

This illustration for "Solomon and Sheba" by Frank McCarthy uses the scale of each element to suggest what's most important: characters, romance, action, and spectacle. 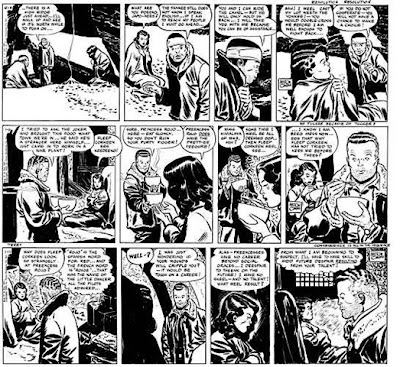 Milton Caniff, like all comic artists, was influenced by film. He used the same principle Hitchcock was talking about when he planned the size of each character and element in this panel breakdown.
----
More about Milton Caniff and other comic artists
Blain Brown explains Hitchcock's rule and much more in his excellent book: Cinematography: Theory and Practice: Image Making for Cinematographers and Directors

You have just read the article entitled Hitchcock's Rule. Please read the article from Sentimental Journey About Comics/Cartooning , Golden Age Illustration more. And you can also bookmark this page with the URL : http://sentimental--journey.blogspot.com/2013/08/hitchcock-rule.html