Yesterday we stayed in a bed and breakfast in the Catskill mountains, whose proprietor Ben owns a basset hound named Barney. 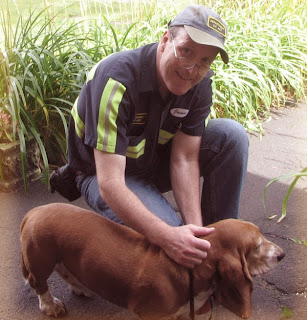 I asked Ben if I could take Barney for a walk and sketch his portrait. Barney is a five-year-old rescue who was hit by cars three times until Ben offered him a new home. 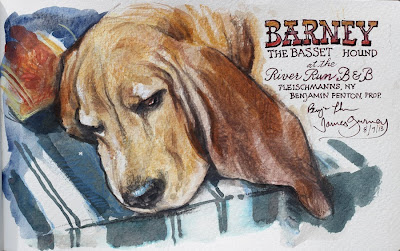 Barney doesn't usually get to hang out in the parlor and receive such attentions, and he definitely rose to the occasion (as much as a basset can rise). Once Barney settled for a nap, I got out my watercolors and water-soluble colored pencils. 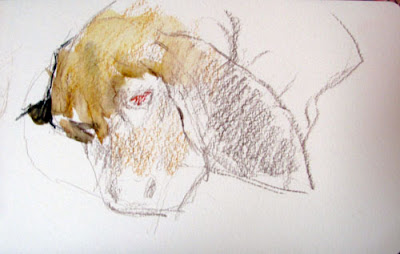 Here's what the sketch looks like as I begin to wet the colored pencils with a water brush. Note how the water alters the dry colored pencil. It darkens, softens, and intensifies the color. 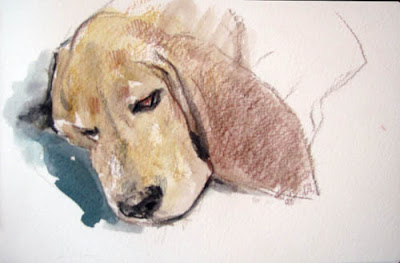 Once I cover the light, warm areas, I add some blue from another brush pen that is filled with fountain pen ink. I am working quickly, because I'm expecting Barney will change position after 10 minutes or so—which he does. After that I work from memory. 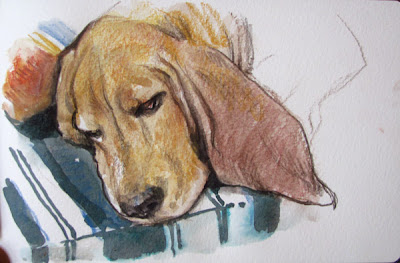 Now the sketch is almost done, and if you scroll back up, you can see it finished.
----
Materials used:
Caran D'Ache watercolor pencils

The place I stayed is called River Run Bed and Breakfast in Fleischmann's, New York.


You have just read the article entitled Barney the Basset. Please read the article from Sentimental Journey About Animals , Watercolor Painting more. And you can also bookmark this page with the URL : http://sentimental--journey.blogspot.com/2013/08/barney-basset.html