How I did a webcast on Concert Window Open

Last night I did a live streaming webcast via Concert Window Open. In this blog post I'll share how I approached the opportunity. I'll offer suggestions for how you can do your own CWO webcast from the comfort of your own home if you would like to try it, too.
I was the first visual artist to present on this new monetized performance venue, which so far has been primarily used by musicians, and which (full disclosure), was co-founded by my son Dan. Tickets were just $1 or whatever people felt like giving. Concert Window gives the artist 2/3 of the income generated by the show.
I was webcasting from Concert Window's headquarters in New York City because my own bandwidth is a little too limited. 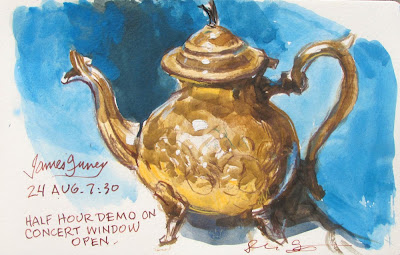 Here's the watercolor painting of a Moroccan teapot that I did during the 30-minute timeframe.
Over 110 people join in from places as far away Shanghai, Indonesia, Germany, Costa Rica, Mexico, Ireland, the Bahamas, as well as all across the USA and Canada. It was a laid-back friendly interchange, like hanging out with friends, and it went by fast! I learned a lot from the experience—and still have a lot to learn. 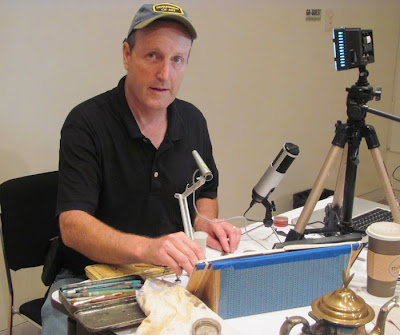 Tech Equipment
I immediately ruled out using the standard set-up that musicians have used so far, namely the laptop camera and onboard mike. Positioning my MacBook Pro's webcam to shoot the art would have blocked my view of everything, and made seeing the screen impossible. Also I wanted better sound. 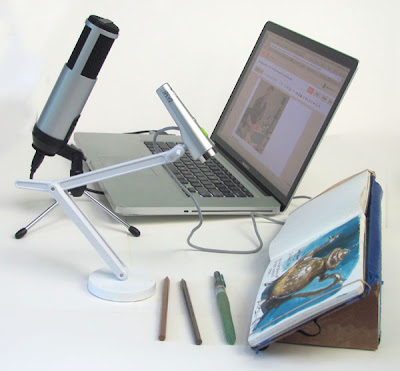 But none of my cameras or mikes plugged into USB ports. So I invested in a USB mike and document camera, knowing I could also use them for video voiceovers and art school presentations as well as web streaming. I researched what was available, and chose the IPEVO Point 2 View USB Camera

($62), because of its clear image, and its ability to be spot focused and positioned at any angle, but you might also consider the IPEVO Ziggi-HD

which has a built-in microphone, higher resolution, and exposure controls, but I haven't tested that model.

which has a great reputation for voice capture. 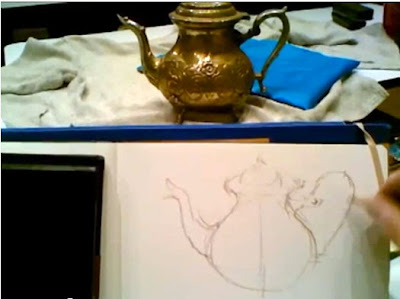 I built a quick triangular wedge stand for the sketchbook to hold it up so that viewers could see the motif behind it. 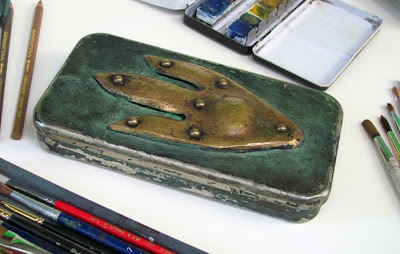 Regular blog readers will be familiar with the other art supplies, but I'll give links for all the gear at the end of this post, as promised. A big favorite was my pencil box, which was hand-forged by Tony Swatton of the Men-At-Arms YouTube channel.

Dealing with Questions
One advantage visual artists have over musicians in this format is that it's possible to have a conversation with viewers throughout the presentation. Viewers were able to ask questions in a scrolling comment panel to the right of the demo screen. Although the comments and questions flew by because there were so many of them, my wife Jeanette sat next to me and read them aloud (she says she's sorry she couldn't get to them all). The questions were great! I responded as best I could while painting.
Promotion
I did several Facebook posts in the days and hours leading up to the event, and mentioned it a few times on blog posts and YouTube videos. I set up a FB events page, but honestly I don't know how to use that right. And I haven't gotten started Twitter, so I probably missed an opportunity there. I also didn't do email marketing, which would have reached more people. Nevertheless, I'm told we set some sort of record for attendance and comments.
The timeframe
The 30 minute timeframe has been the target set by the musicians so far, and it was suggested as a goal, so I tried to stick to it. But it's not set in stone, and certainly open to discussion (see poll at left). To me the advantage of the short timeframe is the same as the TED lecture 18 minute rule: it focuses the brain. But you can't really do much of a painting in 30 minutes, and it might have been good to take time after the painting for pure Q&A and maybe flipping slowly through the sketchbook.
What kinds of art-making might work with this venue?
• Someone with a gift for live storytelling, such as a creature designer or storyboard sketch artist could tell an improv story (with suggestions from the audience) while sketching the action.
• A comic artist or animator promoting a new graphic novel or feature film could show fans how to draw the main character, while answering questions.
• Any kind of handmade art form could work, such as throwing a clay pot, glassblowing, basket weaving, knitting, cooking, or welding--as long as the progress is visible and exciting throughout the time.
• Since all you need is a fairly strong web connection, you could do a webcast from an outdoor cafe, and show a plein-air painting being done on location.

The vibe
This is a fledgling medium, like the invention of television, so the experience is new and exciting for everyone. It's very personal. I'm glad people were forgiving of the shaky camera, the focus adjustments, and the pauses that were inevitable with a one-camera setup controlled by the presenter.

What I would do differently next time
• Maybe a 30 minute demo, followed by 10 minutes of going through a sketchbook slowly (with Q&A) and 10 more minutes of pure Q&A.
• Minimize handheld camera moves. It's probably good to change angles a couple of times, but otherwise bring stuff to the camera if possible instead of vice versa.
• Stay close to the mike.
• Shorten answers as question load increases.

Edit: Here are results of the poll we conducted on the blog.
Links and Resources
Concert Window Open: Set up a webshow
Concert Window Blog
Dan Gurney's writeup after the show
Ratings and reviews on my webcast
IPEVO Ziggi-HD

I hope to do another webcast in a couple months, so let me know in the polls at left what you'd like! And I hope my fellow artists will sign up to do one. It's free to set up. Thanks again everyone who checked in. I appreciate your generosity, and for those who missed it, I'll see you next time.
You have just read the article entitled How I did a webcast on Concert Window Open. Please read the article from Sentimental Journey About http://sentimental--journey.blogspot.com/2013/08/how-i-did-webcast-on-concert-window-open.html