A group of concept artists in California has released a new book in the "Battle Milk" series. The book collects the personal fantasy and science fiction artwork and story concepts by artists who work by day in the field of concept art.

The artists include Jackson Sze, Christian Alzmann, Matt Gaser, Thang Le, David Le Merrer, Kilian Plunkett, Pat Presley, Justin Ridge, and Le Tang. In their official jobs, they have been working on Star Wars 1313, Thor 2, Fountain City, and Star Wars: The Clone Wars, season 5.
I was already a fan of the Battle Milk series when they asked me to write the foreword. Here's my essay:

"In 1581, when Galileo sat listening to a sermon in a cathedral in Pisa, he was only half listening. The other half of his brain floated up to the chandelier hanging from the ceiling. As the priest droned on, he watched the chandelier swinging in a light breeze. He timed the motion against his pulse and noticed that the that it took the same amount of time to swing back and forth, regardless of how far it oscillated. Before the sermon was over, his imagination worked out the principle of the pendulum, which later revolutionized clockwork.
"Galileo was my excuse when I sketched designs for kites in my notebook margins in eighth grade algebra. Out the high windows I could see a band of blue sky and drifting clouds. Looking in that direction had got me scolded, so I kept my head down and drew kites instead: box kites, Marconi kites, string climbers, camera slings, and shutter releases. Whenever I got ahead on my equations, I sketched more construction diagrams.
"After school, when the homework was completed, I checked the sky. If it was calm, I beelined to the workshop to saw up sticks and to stretch string and paper. If the wind was up, I bicycled to the schoolyard with my newest kite, which still smelled of glue and hope. Sometimes the day ended well with a kite that climbed to a speck against the sky. Other times it ended in disaster. Many of my kites died tangled in trees and wires. Or worse,\ one time my dad’s camera fell 300 feet to the schoolyard pavement when the cigarette fuse burned through its tether instead of the shutter release.

"I suffered from Galileo Syndrome later when I finished college and started working as a commissioned illustrator. After a day spent painting archaeological scenes for National Geographic, I set aside a few previous evening hours painting my own worlds. At my little drafting table in the basement, with snow piling up outside the window, and the steam pipes hissing just above my head, I let my paintbrush wander to cities on waterfalls and parades with dinosaurs. That was what got me into all that trouble with Dinotopia.
"Each of the artists in Battle Milk III has been diagnosed with a incurable case of Galileo Syndrome. They do a stellar job at their concept art during the day, mind you, throwing their hearts into it, and contributing concept art to some of the most famous movies and games. But in those spare moments waiting for meetings, or when they’re commuting back home from work, their minds are already dancing across cirrus clouds. When they get home and the kids are in bed and the dishes are washed, these artists are hard at work setting sail across their own galaxies.
"Before they asked me to write this foreword, I was already a fan of Battle Milk, having picked up a copy of the last edition and cherished it on my inspiration bookshelf. They have let me peek at the stuff in this volume, and I don’t know how it is possible, but this edition surpasses the last, and takes the viewer into whole new landscapes. I send my warm wishes and hearty congratulations to all of the daydreamers and margin doodlers represented herein—and to you, the reader, for buying this ticket to the wild half of their brains. You’re in for a rollicking ride." 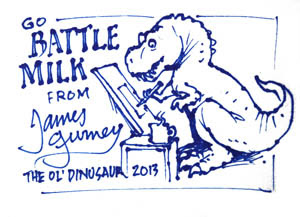 Check out the original sketches that the team drew in the copies of Battle Milk 1 and 3 that they sent me! Awesome! 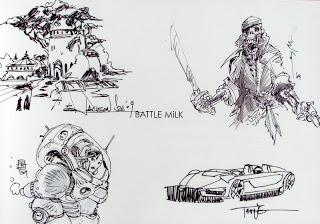 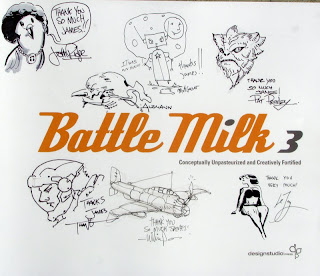