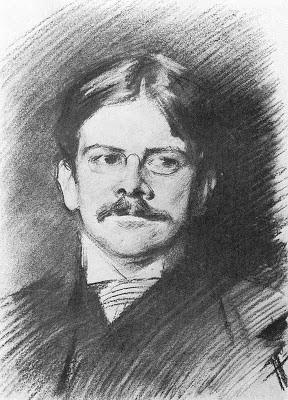 Portrait of E.A. Abbey by John Singer Sargent
Edwin Austin Abbey is an inspiration to late bloomers, because he didn't really start painting in oils until he was in his 40s. Of course he had a good teacher in his friend John Singer Sargent, with whom he shared a studio that was specially built next to Abbey's home, Morgan Hall in Fairford, England. 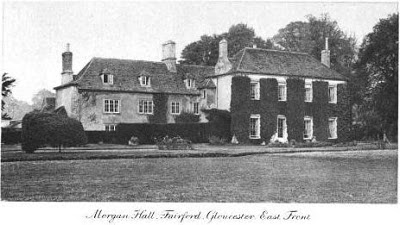 Together they had accepted a commission to paint mural decorations for the Boston Public Library, and they needed a big studio space to work in. Sargent influenced Abbey with his deft approach to painting from observation, and Abbey influenced Sargent with his profound knowledge of history, literature, and costume. That mutual influence and cross-fertilization made each artist grow in new directions, and dramatically altered the course of each of their careers. 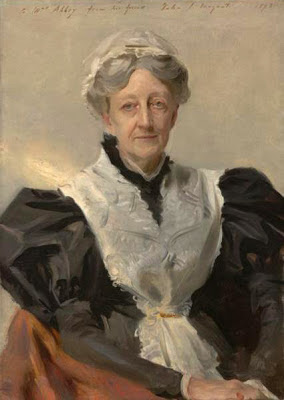 The following description of the Morgan Hall studio, which was the largest painting studio in England at the time, comes from M.H. Spielmann, who wrote about it in an article in Magazine of Art, also quoted in E.V. Lucas' biography:
"It is a workshop, not a showplace, but none the less picturesque for that—a place where great thoughts may be carried out on a fitting scale, and where many a lofty conception is in the course of concretion. 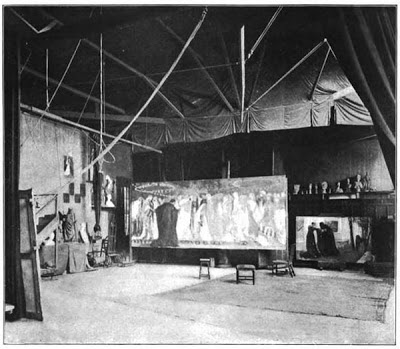 Abbey: 'Sir Galahad at the Castle of the Maidens.' Note changes in Galahad's silhouette, the removal of the circular candelabras, and other changes in the maidens, compared to the finished mural below.

"Enormous easels, a dozen or more, laden with vast canvases in every stage of completion occupy but a fraction of the space; tapestries hang from heavy frames, not for decoration but for use, and carved oak doors and panels rest against the walls; studies and casts of curious architectural features and sculptures; arms and armour, lay figures and figurines; stacks of canvases, unused, half-used, and used, for sketches from Nature, or ideal compositions, or pictures'on the way'; chests of drawers full of specimens of superbly designed materials- velvets, brocades, and silks of various periods and special manufacture—with new fabrics of particular colour or design, mere bits, many of them, but sufficient to reveal the texture, or their secrets of light and shade; old chairs, musical instruments and' properties' of various kinds—all things, in this vast apartment, as accessories for the designer's craft and nothing more.
"On stands and in drawers, sketch-books and albums of studies are classified as to subject, arranged in groups according to the pictures for which they were produced. Trestlefuls of elaborate studies and half-finished drawings stand around; photographs are pinned about of pictures of the period with which the artist may for the moment be dealing—with a view to maintaining in his own mind the spirit rather than the art-standard of the time; a library crowded with the finest folios and books of art and archaeological reference stands ready, with a writing table close by, littered in orderly confusion, to remind the painter of the daily communication of the outside world. There is a built-up scene of the next great picture, devised for better realisation of proposed composition, with all the crowd of figures and dressed-up figurines: for thus the painter experiments with arrangements and with effects of light and shade. Not too much importance is attached to such artifices; for not long since a great model of a colonnade of extraordinary elaboration was constructed, with a view to determine the question of shadows thrown by the pillars when a light was introduced, and forthwith discarded on its failure to reveal with truth the sought for effects. But thoroughness and laborious conscientiousness are main qualities of Mr. Abbey's temperament: he seems to aim at that sort of truth of effect—the only sort—that can convince the spectator; and he neglects no means, whatever the cost in effort or expense, to secure the end which is his only aim.

"Regarded from this point of view the remaining feature of the studio takes peculiar significance. I refer to the amazing wardrobe —an interior building constructed at one end of the studio. Here, hung in due order, classified with such care, love, and pride as an entomologist might display in the arrangement of his specimens, is the vast collection of garments of all periods and styles which Mr. Abbey has collected or had devised, and to which additions are continuously being made. Here they hang, on right hand and on left, in diminishing perspective, until one might almost imagine one's self in the 'property shop' of some great theatre. Costumes original and special (men's and women's), hats and cloaks, boots and shoes and accessories—all but the furs and arms, which for greater care are stored elsewhere. Yet they are not by any means regarded by the painter in the light of theatrical 'properties'. . . they serve, as they ought, to give assistance as to cut, fall, character, light and shade, and composition of line—that is to say, as suggestions for invention and not model for imitation. In short, Mr. Abbey, as the practical architect of his pictures, does not despise anxious consideration and preparation of the scaffolding."

"Such was the room, then, in which, in 1891, in the heart of Gloucestershire , two American artists embarked upon their task of beautifying and ennobling a New England city."
It is hard to overestimate how important these murals were to America in the early 20th century. Sargent's mural with its biblical theme was often called "America's Sistine Ceiling." Abbey's mural of the Quest for the Holy Grail was often described as "the most popular mural cycle in America; at one time "no undergraduate room in Harvard, Yale, or Princeton was complete without large framed photographs of one or more of the details of the composition." (Homer Saint-Gaudens The American Artist and His Times, 1941). 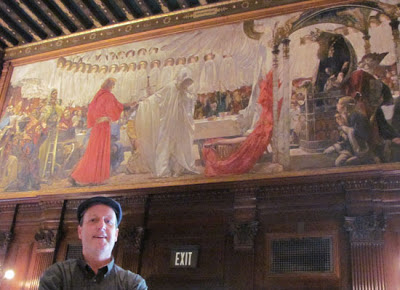 Both Abbey's and Sargent's murals can still be seen today at the Boston Public Library in Copley Square.
Read more:
Thanks, Kev
E. A. Abbey on Wikipedia
Edwin Austin Abbey by E.V. Lucas

Previously on GJ:
Part 1: E.A. Abbey, "Greatest Living Illustrator"
Part 2: Abbey's Advice to a Young Artist
Manikin in the Snow
Abbey's Morgan Hall
You have just read the article entitled Part 3: Abbey, Sargent, and the big studio. Please read the article from Sentimental Journey About Golden Age Illustration more. And you can also bookmark this page with the URL : http://sentimental--journey.blogspot.com/2013/06/part-3-abbey-sargent-and-big-studio.html