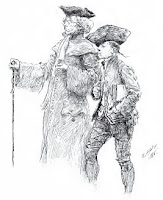 In 1892, Edwin Austin Abbey received a letter from a young artist traveling through England on his way across to Paris. He wanted advice from the famous illustrator. Here was Abbey's response:

"The great trouble," he wrote, "with the vast majority of our artists at home is that they cease to be students too soon. They spend a couple of years—even three or four years— in Paris, or some other place where students congregate, and, bored by the drudgery of the serious atelier and seeing certain easy-going pictures attracting a certain amount of attention and having also a certain amount of merit, they throw over the opportunity (which, mind you,never comes again) to make themselves as perfect as they may be with the aid of all the facilities a far-seeing body of eminent artists have, during many years, accumulated for their benefit, and dash into paint with a confidence bred entirely of ignorance and intolerance of the training that they, at that ill-informed and blind period of their lives, do not see the need of."

Abbey continued: "Go to the Louvre constantly (on Sunday mornings you will have the place to yourself, or nearly so). Look at the designs and drawings by the great masters and reflect that they thought it necessary to take all that pains before they began their painting, and that they did not rely upon genius or talent to carry them through. Remember that you are pretty blind at present. I don't remember ever before having seen an art student of your age absolutely without a sketch-book. You should be sketching always, always. Draw anything. Draw the dishes on the table while you are waiting for your breakfast. Draw the people in the station while you are waiting for your train. Look at everything. It is all part of your world. You are going to be one of a profession to which everything on this earth means something. Keep every faculty you have been blessed with wide awake. The older you get the more full your life will be getting." 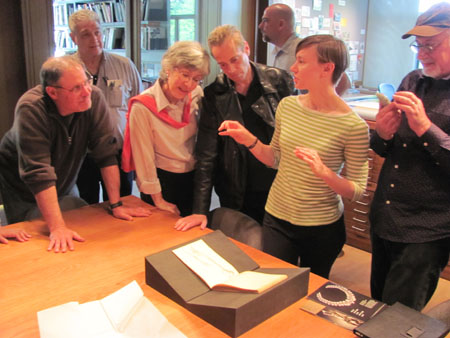 Hudson River Rats looking at one of Abbey's sketchbooks at the Yale Art Gallery.
E.V. Lucas, Abbey's biographer, said, "The sketch-books which Abbey himself filled, all of which are preserved, and with which I have spent delightful hours, are proof that he practised what he preached. But probably of no artist of any time can it more truly be said that he was always learning—always preparing to be ready to begin." 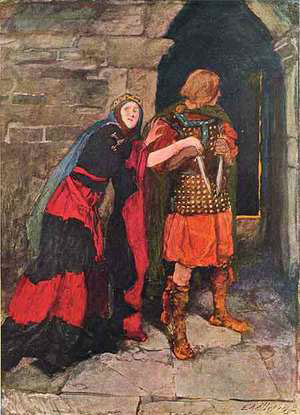 Lucas continues: "The tendency of so many young artists to dispense with drudgery was much on Abbey's mind, and there are other references to it in his letters. Among various unfinished fragments of correspondence are the following remarks to the late Charles Eliot Norton. 'In the first place I am convinced that it should be impressed upon this amiable legion, that is to say, the unprepared and usually insufficiently endowed students sent by the charitably disposed to study art abroad, that for a long time the aesthetic part of art instruction should be held in abeyance, that the science of the profession, or calling, should be acquired as patiently and as thoroughly as possible. When I say as possible, I do not mean to place any limit of time or means. This science is taught in many continental schools and at the Royal Academy; perhaps in its highest form, aside from these aesthetic questions, at the' Ecole des Beaux Arts '-and after the hand has learned to obey the eye, then the aesthetic part of the education should begin—years of it, not months. . . . The majority return to their native land full of the latest fad in pictures; and I speak now of America—in the absence, as a rule, of the inspiration derived from American students in Paris the environment of great works of art, they feed for the balance of their days upon a fashion which may have become obsolete on this side of the ocean almost before they have set up their American studios.'"
-----
Read more:
E. A. Abbey on Wikipedia
Edwin Austin Abbey by E.V. Lucas

Illustration magazine #40 with a feature on Abbey (preview the entire magazine online)
More on Abbey on Muddy Colors blog
Previously on GJ:
Part 1: E.A. Abbey, "Greatest Living Illustrator"
Part 2: Abbey's Advice to a Young Artist
Part 3: Abbey, Sargent, and the Big Studio
You have just read the article entitled Part 2: Abbey's Advice to a Young Artist. Please read the article from Sentimental Journey About Golden Age Illustration more. And you can also bookmark this page with the URL : http://sentimental--journey.blogspot.com/2013/06/part-2-abbey-advice-to-young-artist.html