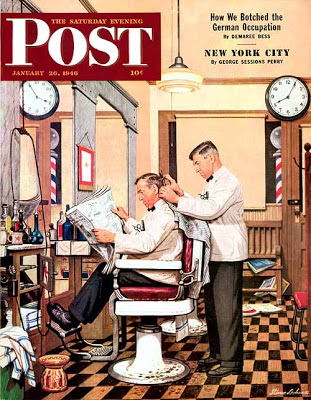 When this painting by Stevan Dohanos (1907-1994) appeared on the cover of the January 26th, 1946 issue of the Saturday Evening Post, it brought on a flood of letters from readers who saw something wrong with it.
On the first day, 36 letters came in. Over the next three days, 52 more arrived. In all there were 161 letters, and the magazine staff had to answer each one.

Can you guess what the majority of people found wrong with it?
-------
EDIT: Blog reader Andrew Mann has identified the number one issue: the clock is overlapping the upper corner of the door, preventing it from opening.

Back in 1946, Post reader Ina Peterson wrote a poem about the problem:
"I've heard of the face that stopped the clock,
But I've never known before
Until I viewed it in The Post)
Of a clock that stopped a door."

Art Editor Kenneth Stuart wrote: "In most glass paneled doors the distance from the edge of the door to the panel is the same on the sides as it is on the top. While Mr. Dohanos has not drawn with detailed accuracy the top of the door, his measurements are correct. The misunderstanding doubtless comes from artists taking liberties with photographic reality."
From the book: Illustrating for the Saturday Evening Post

You have just read the article entitled Dohanos’s Barbershop. Please read the article from Sentimental Journey About Golden Age Illustration more. And you can also bookmark this page with the URL : http://sentimental--journey.blogspot.com/2013/06/dohanoss-barbershop.html