Snow White at the Rockwell

When Walt Disney released the feature-length animated film "Snow White and the Seven Dwarfs" in 1937, it was a big risk, both artistically and financially. The seven-minute shorts had been doing well, but he wanted to develop the art form further in terms of realism, drama, and an involved storyline. 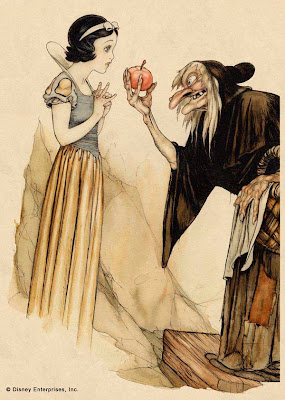 To celebrate the 75th anniversary of the release of the groundbreaking film, original artwork from Snow White is now on display at the Norman Rockwell Museum in Stockbridge, Massachusetts.

The watercolor painting above is by Gustaf Tenggren, who was hired fairly late in the production. He did some of the movie poster art, and irked the Disney artists by going "off-model" in the character designs. 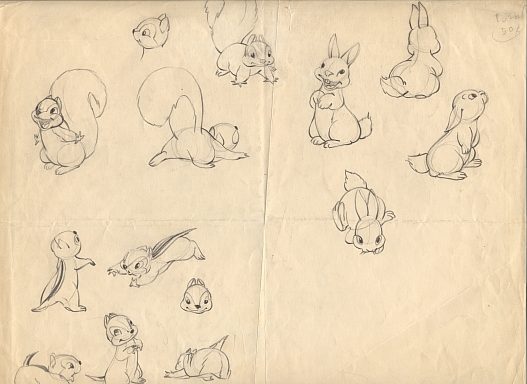 The Disney-curated show says, "many live animals were brought to the studio for the artists to study. The tortoise actually stayed on after the end of the production with a 'Traffic Department' sign on his back, a jab at the studio's slow messenger service." 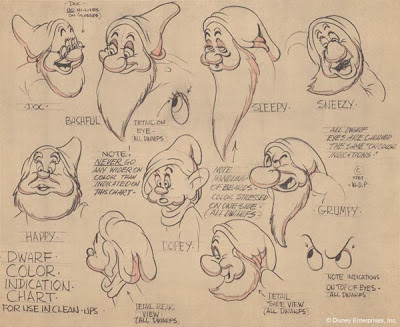 The show includes about 200 pieces, including character models, cel set-ups, original watercolor backgrounds, storyboards, layouts, and marketing artwork. The cel set-ups unfortunately are on reproduction backgrounds, and the labeling isn't as clear as it should be about what is original.
There are character studies by Fred Moore, watercolor backgrounds by Samuel Armstrong, and ensemble animation of the dwarfs by Bil Tytla. Since Disney asked artists not to sign their work, the artist is not known in many cases, so the generic tag "Disney Animation Artist" is used. 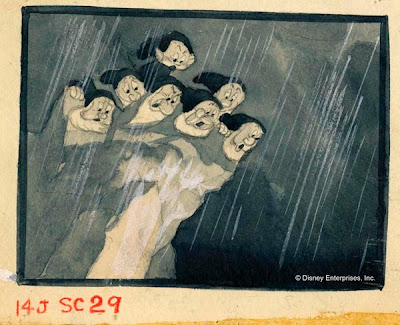 Among my favorite pieces in the show were Ken O'Connor's thumbnail layout sketches to plan the dramatic final confrontation of the dwarfs and the evil queen.


In this video (link to YouTube), Walt pitches each of the characters using maquettes.

Book: The Fairest One of All: The Making of Walt Disney's Snow White and the Seven Dwarfs