Most histories of Impressionism define the movement in terms of the outward stylistic features of the paintings. These features typically include such things as small strokes, broken color, white ground, high key palette, rapid execution, sketchy handling, and commonplace subject matter. 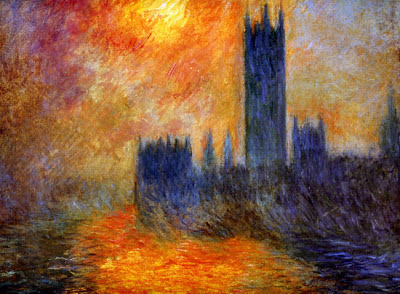 (Above: Monet, "Houses of Parliament, London, Sun Breaking Through the Fog" 1904)
This approach to defining a trend in painting is natural for art historians who spend a lot of their time categorizing paintings and trying to make sense of them after the fact.

The problem is that Monet was intuitive in his approach, modest in his statements, and averse to theorizing. 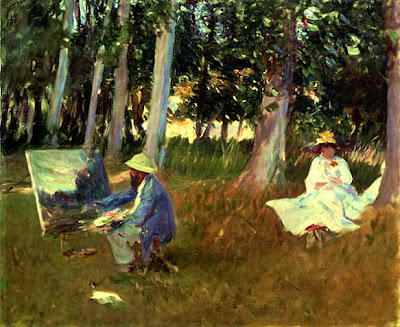 (Above: "Claude Monet Painting at the Edge of a Wood," by John Singer Sargent, 1887)
One place to find answers to this important semantic question is the American expatriate John Singer Sargent. Sargent was perfectly bilingual, was close friends with Monet, he admired him greatly as an artist, and painted outdoors with him.

According to Sargent's 1927 biography by Evan Charteris

Sargent didn’t agree at all with the way people were starting to use the term "impressionist."

"My dear MacColl,
I daresay I muddled what I said about Impressionism last night and perhaps this is a clear definition of what I think Monet would mean by the word, "The observation of the colour and value of the image on our retina of those objects or parts of objects of which we are prevented by an excess or deficiency of light from seeing the surface or local colour."
Of course to a very astigmatic or abnormal eyesight the whole field of vision might offer phenomena for the notation of an impressionist, but to the average vision it is only in extreme cases of light and dark, that the eye is conscious of seeing something else than the object, in other words conscious of its own medium—that something else is what the impressionist tries to note exactly. . . .
Yrs. sincerely,
John S. Sargent.

Continuing to quote Charteris: The two letters which follow were written [by Sargent] to Mr. Jameson, a close friend of Sargent and the author of a volume on art which forms the text of the letters.

31, Tite Street,
Chelsea, S.W.,
My dear Jameson, March 20th
I have been reading your book with great enjoyment, and feel as if my ideas and my vocabulary had gone through a very satisfactory spring cleaning and I like the opposition of your clear processes of reasoning and analysis as far as that will take one and the ultimate mystery that you lead one up to from the different directions. There is one point only that I should quibble at and that is your use of the word Impressionism and Impressionist,

These words were coined in Paris at a particular moment when Claude Monet opened the eyes of a few people to certain phenomena of optics, and they have a very precise meaning which is not the one that you use them for, so that in the exact sense or to a Frenchman, [George Frederick] Watts' saying "All art is Impressionism" would be a misuse of words. "Impressionism" was the name given to a certain form of observation when Monet not content with using his eyes to see what things were or what they looked like as everybody had done before him, turned his attention to noting what took place on his own retina (as an oculist would test his own vision).

It led to his doing 50 pictures of the same subject under varying degrees of light and the phenomena which he recorded would be more or less apparent when there was excess or deficiency of light and the fact that he is astigmatic accounts for his having an excellent subject for his own discoveries in this line.

A person with normal eyesight would have nothing to know in the way of "Impressionism" unless he were in a blinding light or in the dusk or dark.

If you want to know what an impressionist tries for (by the way Degas said there is only one Impressionist "Claude Monet") go out of doors and look at a landscape with the sun in your eyes and alter the angle of your hat brim and notice the difference of colour in dark objects according to the amount of light you let into your eyes—you can vary it from the local colour of the object (if there is less light) to something entirely different which is an appearance on your own retina when there is too much light.

It takes years to be able to note this accurately enough for painting purposes and it would only seem worth while to people who would wear the same glasses as the painter and then it has the effect of for the first time coming across a picture that looks like nature and gives the sense of living—for these reasons Monet bowled me over—and he counts as having added a new perception to Artists as the man did who invented perspective.

This observation or faculty does not make a man an Artist any more than a knowledge of perspective does—it is merely a refining of one's means towards representing things and one step further away from the hieroglyph by adding to the representation of a thing the conscious Will of the Medium through which one sees it. One of these days some genius will turn it to account and make it part of the necessary equipment of an Artist.

For the present in its exact sense "impressionism" does not come within the scope of your considerations. Of course I agree with what you say, given the rough and tumble and un-Jameson like use of the word.

You can make impression stand for whatever you like but not add-sm or -ist without being challenged by the astigmatic.
Yours sincerely,
John S. Sargent

...and the next letter by Sargent:

My dear Jameson, April (dated 1911 or 1912).
Thanks for your kind letter. I am glad you take my bit of special pleading good naturedly. I was afraid after having posted my letter that I had not made clear that I was not quarrelling with what you said about Impressionism but only defining the term. Of course your meaning is the general accepted one and the right one in the context as long as the precise meaning is so little known it will be years before the idea itself will have become familiar even to most painters—when it is, there will have to be a foot note in your book.

The habit of breaking up one's colour to make it brilliant dates from further back than Impressionism—Couture advocates it in a little book called "Causeries d'Atelier" written about 1860—it is part of the technique of Impressionism but used for quite a different reason. Couture, Delacroix, Orchardson break up their colour but they are not Impressionists.

Did Monet agree with Sargent's correction of Jameson? Charteris shared Sargent's letter with Monet, and Monet recalls the famous origins of the word from the critic Louis Leroy, and he seems less willing to split hairs:

"Impressionism it is only the immediate sensation. All painters were more or less impressionistic. This is especially a matter of instinct. All this is simpler than Sargent believed. The term Impressionism was invented by the satirical newspaper as ridicule, which angered Manet. I did a lot wrong, because I was a bad example of it. . . I needed to create a cooler sensation. Yes it is the fading and passing tones within a tone. It is a nuance, for example between blue and yellow. It is something that can only be expressed in painting. It is true that the sun decomposes everything.

Monet then turned to recollections of Sargent: 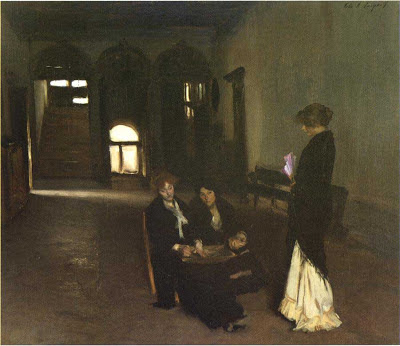 "I remember for the first time meeting Sargent and [Paul] Helleu at the Rue de la Paix 1876. Sargent was making a fuss over me, saying, “Is that really you, Claude Monet?” Then he invited me to dinner. He wanted to take us to the Cafe de la Paix, and he had many friends with him. I suggested the Cafe du Helder, and requested a private room. Unfortunately there were several of my pictures there, I was embarrassed as we entered, ashamed that Sargent and the others might think it was because of my paintings I had brought us to Cafe Helder."

Monet continued that when he saw Sargent in London, Sargent claimed that Sargent himself was not an Impressionist in the sense that he understood the word because he was too much under the influence of his teacher Carolus-Duran. Carolus-Duran drew his inspiration more from the Spanish school of Velazquez, which put its emphasis on correct values.

Monet said further, with great modesty, that "Sargent is greater than I am...I have a horror of theories. At least I have the merit of having painted directly to nature by seeking to make my impressions of the most fugitive effects. I am sorry to have been the cause of this name that has been given to a group, most of which had nothing impressionism."
----
This revelation has made me revise my assumptions about the relationship of Sargent and Monet, and about the intent of Impressionist painting. It has made it easier for me to look beyond some of its more obvious, extreme, and external features. I am especially surprised to see the term cast in terms of the eye's response not only to very bright light, but also very dim light.

You have just read the article entitled Monet, Sargent, and “Impressionism”. Please read the article from Sentimental Journey About Academic Painters , Plein Air Painting more. And you can also bookmark this page with the URL : http://sentimental--journey.blogspot.com/2013/06/monet-sargent-and-impressionism.html