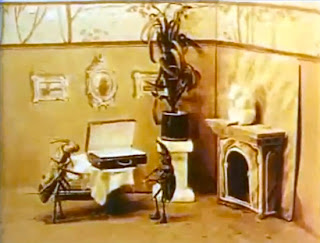 Above is a still from an early silent era stop-motion film made by the filmmaker Władysław Starewicz in 1912. Below is the film, called "The Cameraman's Revenge."
The stop-motion puppet actors are made from real insects, including a beetle, a dragonfly, and a grasshopper.
This is just one of several strange pioneering stop-motion films. See some others at the Smithsonian blog
You have just read the article entitled Early stop-motion with real insect characters. Please read the article from Sentimental Journey About Animation more. And you can also bookmark this page with the URL : http://sentimental--journey.blogspot.com/2013/06/early-stop-motion-with-real-insect.html