Gus White was a traveling puppet maker, ventriloquist, and portrait painter who brought a Punch and Judy show to small town America. 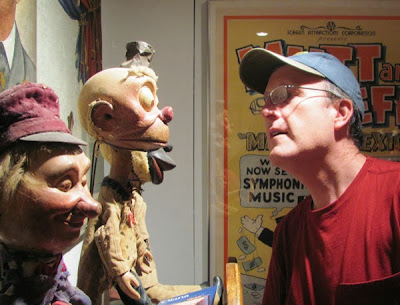 Yesterday, using watercolor and colored pencils. I sketched some of Gus White's one-of-a-kind hand puppets. White carved the heads from wood, painted them, and applied real hair or wool. 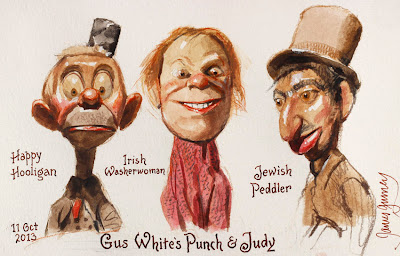 White based his show on the traditional European Punch and Judy, but he put an American gloss on it. His version included cartoon icons of the day, such as Happy Hooligan, along with various ethnic stereotype characters, such as the Irish washerwoman, the Jewish peddler, the proper Englishman, the Indian, and various African-American types, all very typical for one hundred years ago. 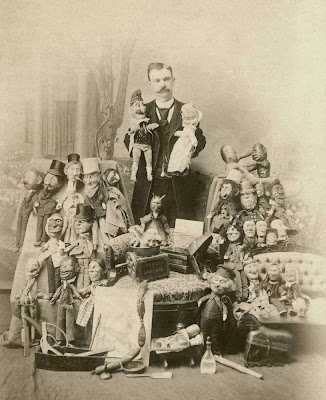 In this vintage photo, Gus White is surrounded by his cast of characters. The Irish washerwoman is visible third from the left in the bottom row, and the Jewish peddler is visible (with a fuller beard) in the clump of characters on the right side.

You can read more about the story of Gus White and his puppets here.
You have just read the article entitled Gus White's Puppets. Please read the article from Sentimental Journey About Pencil Sketching more. And you can also bookmark this page with the URL : http://sentimental--journey.blogspot.com/2013/10/gus-white-puppets.html