Painting into the Soup

Here's a sketch that I did yesterday on a rainy day in Bennington, Vermont. I'm here as a judge for the exhibition of the Society of Animal Artists—more on that tomorrow. 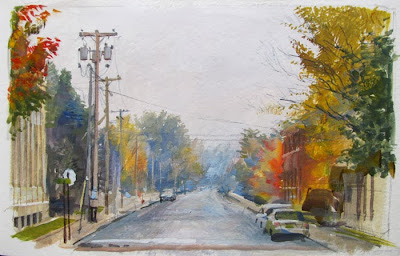 This picture is painted in gouache, which is the best water medium for detail and value control, and I want to tell you about an unusual technique called "painting into the soup" that works well for conveying this kind of misty weather. 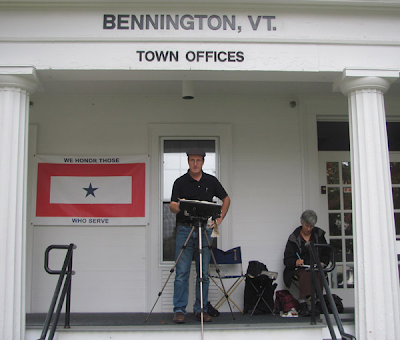 Because of the rain, Jeanette and I had to find a painting spot that was under cover, so we drove around Bennington until we found this public building that wasn't in use on the weekend.

Working on watercolor paper, I did a very quick pencil layin, and then applied the "soup"—a thin layer of opaque titanium white, lowered just a little bit from pure white with a little blue, yellow, and red. 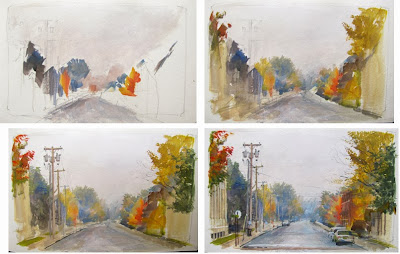 The soup went across the whole sky and the far end of the street, and then tapered off down past the treetops and toward the foreground. With 100% humidity, the soup took a while to dry so it influenced some of the mixtures as I laid on subsequent areas. 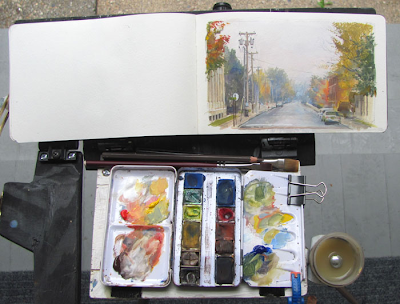 Here's what the palette looked like, with a mixed Schmincke and Rublev pan set of transparent watercolors, and gouache on the flanking areas in white, cad red, yellow, and ultra blue. 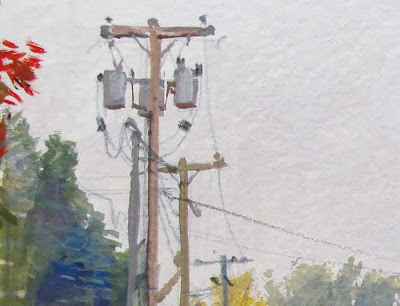 When the soup dries, it takes the colored pencil a bit like gesso would, allowing very sensitive small touches. Instead of black, I used two values of gray Caran d'Ache Supracolor for the delicate telephone wires and fine branches.

This idea of painting into a soup of gouache was used by William Trost Richards, and it's also a method you can use in oil using colored soup to influence your color schemes. Norman Rockwell and Andrew Loomis talk about this as an oil method. Just be careful to keep the soup thin, and only in areas where you want it to influence later mixtures.

Caran D'Ache watercolor pencils
Amazon: Schmincke Watercolor Pocket Set,
and a larger Schmincke set for a better price that Steve suggested.
Super magnet for holding down the cup
You have just read the article entitled Painting into the Soup. Please read the article from Sentimental Journey About Watercolor Painting more. And you can also bookmark this page with the URL : http://sentimental--journey.blogspot.com/2013/10/painting-into-soup.html