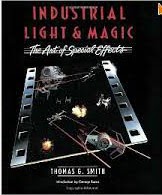 Back in 1987, it wasn’t so easy to find out how special effects were accomplished. You had to hunt down specialty magazines like Starlog, Cinefantastique, or Fangoria, or you had to know someone in the industry.
But a book came out that year called “Industrial Light & Magic: The Art of Special Effects

”, which lifted the veil on the mysterious methods developed by Industrial Light and Magic, the company that rocked the world with the original Star Wars movies, Raiders of the Lost Ark, Dragonslayer, and E.T. 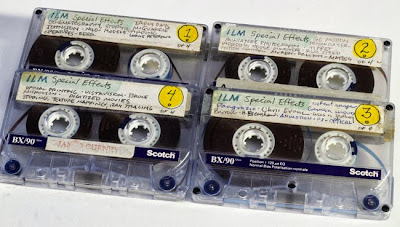 I didn’t own the book, but to show you what a geek I was, I borrowed it from a friend, and read the entire text into cassette tapes. That way I could listen to the words, and imagine the pictures, while painting at my easel. I shared the tapes with my friends in the Golden Palm Tape Network, a small fellowship of artists who exchanged shop talk via audio cassettes.
Revisiting the tapes again recently brought me back to the spirit of innovation that was in the air during that era of visual effects. Many of the methods were groundbreaking in their day. They are still amazing accomplishments by today’s standards, such as:
The last section of the book explores the pioneering steps toward “digitized movies,” and “The Pixar,” which at the time was a research and development arm of ILM, before it split off to be an animation studio. Jurassic Park was still five years off, but the basic concept of digital VFX was already understood, and the main problem was storing and processing the vast amount of data needed to render images at a photo-real level.

I’ve taken a look again at some of the science fiction classics from before 1987, especially Blade Runner, (which was more the work of Doug Trumbull and John Dykstra), and Alien (which was the work of Brian Johnson, Martin Bower, Carlo Rambaldi and others). I can’t help but be impressed anew with the impact and integrity of the in-camera methods from 30 years ago. Far from being quaint or nostalgic, many of the films are incredibly convincing and compelling. The grounding in the physical world gives all those films a bracing energy.

Of course, the breakthrough films of the digital revolution, such as Terminator 2, Jurassic Park, and Toy Story, were equally astonishing in their day, and each new year brings new wonders, but I notice that leading directors are looking for ways to get as much shot in-camera and on film as possible.

And there’s a whole generation of DIY YouTube innovators like Freddie Wong who are using a combination of digital and practical tools in a new synthesis that’s smart and cheap and witty and light on its feet.

The book is still available on Amazon: Industrial Light & Magic:  The Art of Special Effects