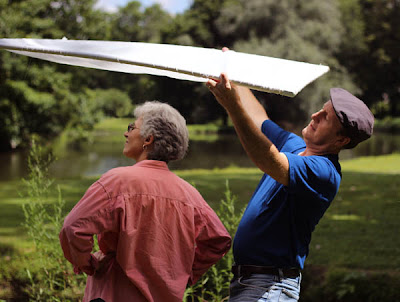 What is meant by hard and soft light?

Hardness or softness refers to how large the primary light source appears to be from the point of view of the subject. A hard light comes from a small, sharp source. Even though the sun itself is a very large object, it’s a relatively hard source of light because the disc of the sun appears small in the sky. A streetlight or a theater spotlight is also a hard source. Think of a hard light source as one that you could completely cover up with your thumb held at arm’s length. A medium-hard light is one that you could cover up with the width of your palm.

Soft light, on the other hand, shines out from a wide area, as seen from the subject’s point of view. This could be a fluorescent light, a north-facing window, or an overcast sky. A soft source is any light that appears larger than a piece of office paper held at arm’s length.

Effects of hard and soft light
Any given light source becomes harder as it moves farther back from the subject and gets progressively smaller from the subject’s perspective.

These two photos of an écorché head demonstrate the effects of hard and soft light outdoors at midday. At left, direct sunlight coming from above and to the right illuminates the head. Note the clear division between light and shadow, the crisp edge of the cast shadow projected by the nose onto the chest, and the pocket of shadow in the eye socket.

At right, the same head is lit by a soft light positioned directly above. With the direct sunlight diffused, there’s no clear division of light and shadow, and no definite edge to the cast shadows. Instead, the darkest tones appear in the hollows and the down-facing planes.
In soft light, planes tend to get lighter as they face upward since they receive more and more of the diffused light from above. In the case of this photo, the light is diffused by a large white piece of fabric, but it would be the same effect if the sky were covered with a thin layer of clouds.
Hard light is more directional and dramatic, but it can also be harsh and unflattering. Highlights are more pronounced. It casts crisper shadows and it brings out more surface texture, especially in the region of the half light, where light turns to shadow.

Soft light is generally more suited to portraiture because it shows fewer wrinkles. Because there are no sharp-edged cast shadows, the overall effect is simpler. Tonal transitions from light to shade are more gradual in soft light compared to hard light.
-------
For the complete article, with additional illustrations and more info, including how to set up your lights to get hard and soft light, pick up a copy of the current issue of International Artist magazine, voted the #1 art magazine by GurneyJourney readers. The issue also has an article by Mitchell Albala on notan and a call for entries for a contest about seascapes, rivers, and lakes.
For more on light, you can get my book Color and Light: A Guide for the Realist Painter signed from me or from Amazon

.
You have just read the article entitled Hard and Soft Light. Please read the article from Sentimental Journey About Lighting more. And you can also bookmark this page with the URL : http://sentimental--journey.blogspot.com/2013/09/hard-and-soft-light.html