While we wait for the cardinals at the Vatican to make up their minds about the new Pope, let's enjoy some paintings by Jehan Georges Vibert (French, 1842-1902). 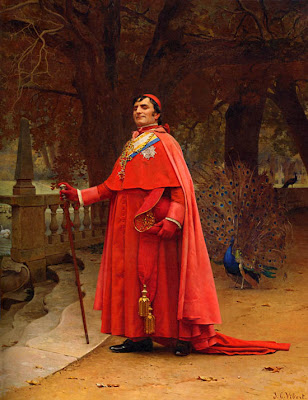 Vibert was known for his gently satirical portraits of ecclesiastical life. This one is called "The Preening Peacock." Vibert entered the École des Beaux-Arts at age sixteen and then studied with the painter François-Edouard Picot. 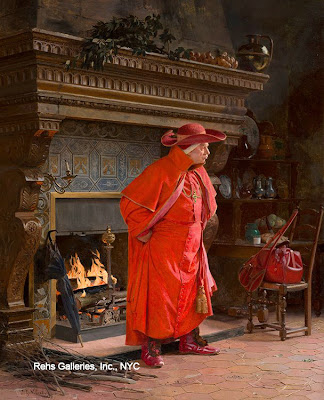 Here is "Cardinal by the Fire." In addition to being accomplished both in oil and watercolor, Vibert wrote a book about the science of painting, mostly about pigments and chemistry. He was also a dramatist, and wrote  several plays.

And he loved to dress up. At one ball hosted by the dealer Goupil, "He dressed up as a very convincing Napoléon I with an entourage, including Detaille as the duc de Reichstadt. When Vibert came face to face with his 'descendant,' Napoléon III, in the person of the painter Jundt, they proceeded to decorate everyone in sight, including the waiters, before ending the evening with a remarkable quadrille." 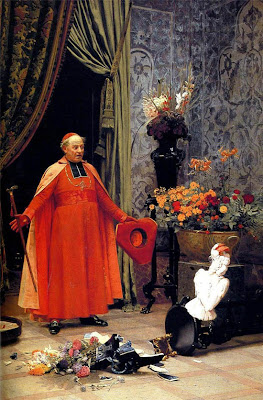 "Emancipation."
There was an exhibition of his work twenty years ago called "Cavaliers and Cardinals: Nineteenth Century French Anecdotal Paintings," which featured Vibert, Bargue, Meissonier, and Detaille. You can still find used copies of the exhibit catalog

, which is the best recent source for biographical information about Vibert. 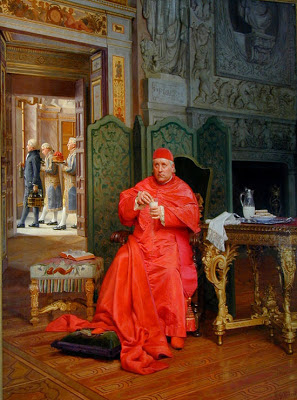 "The Diet."
Vibert's paintings were very popular with American collectors such as John Jacob Astor and William Vanderbilt. According to Wikipedia, "A large collection of works by Vibert was amassed by the heiress May Louise Maytag on behalf of then bishop of Miami Coleman Carroll, who greatly fancied them. This large cache was then donated to the Florida seminary St. John Vianney College in Miami. At this location the extremely impressive collection has had a somewhat checkered conservation history, as well as exhibition history due to the discomfiture of later bishops with the seeming anti-clericalism of the paintings."
---
More about that Miami collection from "Beached Miami's" Jordan Melnick (posted today) Thanks JeanPaul Mallozzi.
Wikipedia on Vibert
Book: Cavaliers and Cardinals: Nineteenth-Century French Anecdotal Paintings

Free Google eBook: "The Science of Painting" by Vibert
There's a Vibert painting of Gulliver in my book Imaginative Realism.
You have just read the article entitled Vibert's Cardinals. Please read the article from Sentimental Journey About Academic Painters more. And you can also bookmark this page with the URL : http://sentimental--journey.blogspot.com/2013/03/vibert-cardinals.html