Otello at the Met

Last night we saw Otello at the Metropolitan Opera in New York. It was a thrilling production of Verdi's late masterwork based on the Shakespeare play. 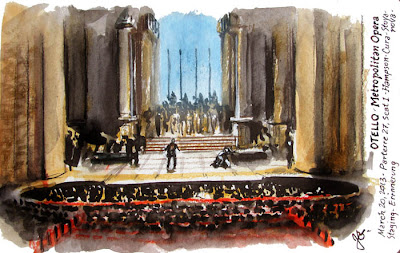 The sets, designed by Michael Yeargan, evoked the grandeur of the Venetian republic in Cyprus, with soaring columns anchoring the structure for both indoor and outdoor scenes. Duane Schuler's lighting design evoked everything from stormy seas to victory bonfires to sunny courtyard gardens.

To create the sketch above, I drew the orchestra pit and the audience during intermission. I drew the staging from memory on the train ride home since there wasn't enough light to see my book during the show.

According to reviewer Marion Rosenberg, this production by Elijah Moshinsky "draws on the rich but subdued palette of such Venetian masters as Titian and Gentile Bellini and sets the drama on Cyprus, where Verdi and Shakespeare envisioned it. A cult-site for the goddess Venus, evoked as the morning star in the opera’s love duet, the island is thus a bitingly ironic setting for a tale of shattered devotion." 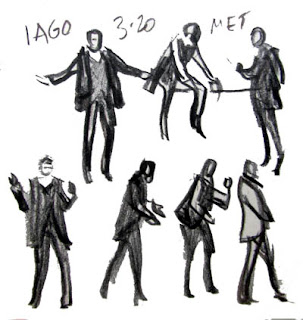 During the show itself, I tried to capture some of the expressive poses of Thomas Hampson, who played the villain Iago. The role requires not only prodigious vocal skill, but also the ability to project the character's gravity and emotion through broad acting, and Hampson delivered brilliantly in all departments.
I recommend this opera to any artist who enjoys Golden Age illustration or academic painting, because it feels like a painting by Lawrence Alma Tadema or Jean-Leon Gérôme or Howard Pyle brought to life on stage. This is one of the Met's classic, traditional, and eye-popping productions, and of course it is Giuseppe Verdi at his very best.
There are still three performances of Otello remaining this season: Saturday, March 23, Wednesday, March 27, and Saturday, March 30. Here's the Met website
Media: Caran D'Ache watercolor pencils

in a Moleskine watercolor notebook

. Given the environment, I didn't use my watercolor set, but the pencils and brush pens are very discreet and work well in low light.
Thank you, Paul
You have just read the article entitled Otello at the Met. Please read the article from Sentimental Journey About Watercolor Painting more. And you can also bookmark this page with the URL : http://sentimental--journey.blogspot.com/2013/03/otello-at-met.html