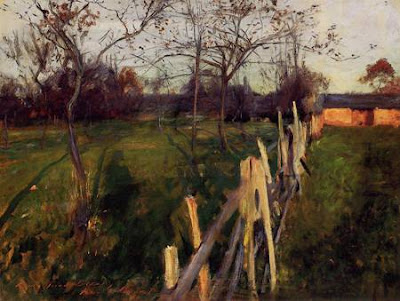 "He was accustomed to emerge [from the house where he was staying in Broadway, England], carrying a large easel, to advance a little way into the open, and then suddenly to plant himself down nowhere in particular, behind a barn, opposite a wall, in the middle of a field. The process was like that in the game of musical chairs where the player has to stop dead, wherever he may happen to be, directly the piano stops playing. The other painters were all astonished at Sargent’s never ‘selecting’ a point of view, but he explained it in his half-articulate way. His object was to acquire the habit of reproducing precisely whatever met his vision without the slightest previous ‘arrangement’ of detail, the painter’s business being, not to pick and choose, but to render the effect before him, whatever they may be.”

You have just read the article entitled How John Sargent found a painting subject. Please read the article from Sentimental Journey About Academic Painters , Plein Air Painting more. And you can also bookmark this page with the URL : http://sentimental--journey.blogspot.com/2013/03/how-john-sargent-found-painting-subject.html