The print edition of Glamour magazine in Germany regularly asks its editors where they have been getting inspiration lately. This time it was fashion designer Kai Margrander's turn. 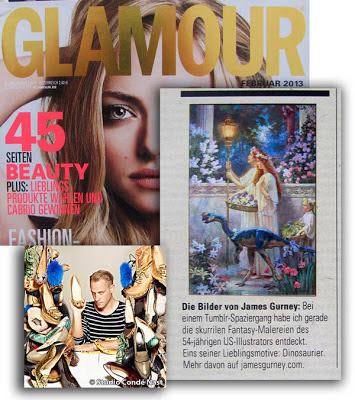 He mentioned the book The Great Gatsby

, the Café de Flore in Paris, his Morgan silk jacket....and Dinotopia. He says: "On a stroll through Tumblr, I discovered the whimsical fantasy paintings of the 54-year-old U.S. illustrator. One of his favorite subjects: dinosaurs."

Mr. Margrander's other favorite things include his garden in Lower Bavaria, the song "Nagh el Borda" by Oum Kalthoum, Star Wars, and the word "Absolutely!"
------
Thanks, Mr. Margrander! Kai Margrander's blog: "The Talented Mr. M"
Courtesy of the print edition of Glamour magazine, German edition, February 2013 issue.
The original painting of "Garden of Hope" is still on view through March 13 in New Hampshire.
You have just read the article entitled Kai Margrander's Favorite Things. Please read the article from Sentimental Journey About Dinotopia more. And you can also bookmark this page with the URL : http://sentimental--journey.blogspot.com/2013/03/kai-margrander-favorite-things.html