Texture in a sunlit round tower

This drawing of a round stone tower illustrates a basic principle of light on form: in direct sunlight the appearance of greatest texture occurs at the area of the form called the darker halftone, just before the line of the terminator divides light from shadow. 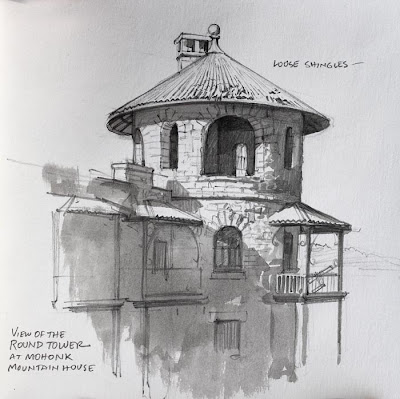 In this case, the region is three quarters of the way to the right of the tower since it's lit from above and to the left. The rough texture of the stone is not very apparent within the big open shadow areas and in the areas on the left of the tower where it is directly front-lit.
The drawing is in graphite pencil and gray wash, about 6x7 inches. As with any sketchbook drawing, I had to be selective about where to put my time and effort. So with the limited time I had, I loaded the shadow edge with fine detail and summarized the other areas with flat tones. 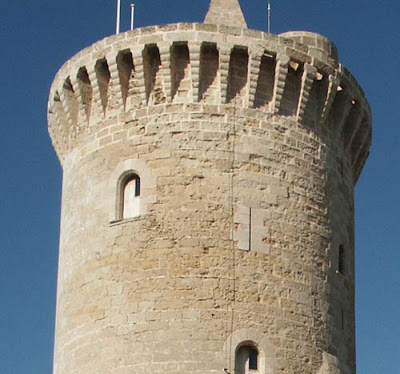 (photo of Castle Bellver by Randy B.)
A common mistake in rendering a textural form in sunlight is to make the texture equally prominent throughout the form. In digital images, the appearance of overall equal texture can result from mapping a bumpy two-dimensional pattern equally over a 3D form. The texture in the shadow should not just be a darker version of the texture in the light because that’s not how the eye sees it.
The reason the texture is difficult to see in the shadow region is because it is lit from a variety of directional sources, including the blue sky above and reflected sources from below. These multiple sources effectively cancel the appearance of texture.
-----
This topic is covered in Color and Light: A Guide for the Realist Painter (Amazon)

or (signed from my web store)
You have just read the article entitled Texture in a sunlit round tower. Please read the article from Sentimental Journey About Lighting more. And you can also bookmark this page with the URL : http://sentimental--journey.blogspot.com/2013/03/texture-in-sunlit-round-tower.html