Yesterday, Good Friday, 2013, we set up our easels on the roughest corner of the roughest neighborhood of the city that New York magazine called the “Murder Capital of New York.” Here is what happened:

(Direct link to Youtube Video) Word quickly spread that there were five artists set up on Lander and Third Streets. Locals told us that they had never seen an artist painting outdoors in their neighborhood in the 50 years they had lived there. 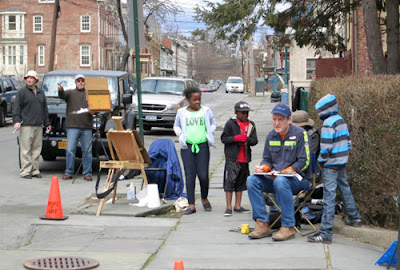 (Photo by Susan Voss)  I was a little nervous when I first arrived, having read what Chuck Schumer said about Newburgh at a Senate hearing: "There are reports of shootouts in the town streets, strings of robberies, and gang assaults with machetes.”

But I felt pretty safe because Garin Baker knew some of the guys in the gang called the Unique Soldiers, who control the north side. Tennis shoes hung from the power lines to mark the group's membership. 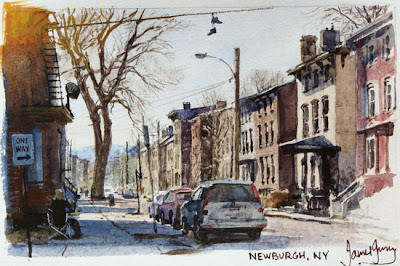 Kids came up shyly to watch us paint. One man was on his way to put flowers on his wife's grave. Another guy said the secret to a happy marriage is to "stay prayed up." Everyone who walked by wanted to check out our paintings. They all had a kind word for us, and everyone seemed to enjoy the early spring sunshine.
------
The Hudson River Rats this time included Garin Baker, Kev Ferrara, Jim and Jeanette Gurney, Mary Sealfon, and Susan Daly Voss
New York magazine "Murder Capital of New York"
Please share this video on Facebook or your blog
You have just read the article entitled Urban Plein Air Painting. Please read the article from Sentimental Journey About Plein Air Painting , Watercolor Painting more. And you can also bookmark this page with the URL : http://sentimental--journey.blogspot.com/2013/03/urban-plein-air-painting.html