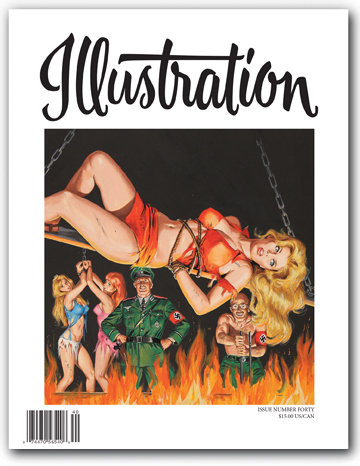 The new Illustration magazine has arrived on the newsstands. The cover feature examines the sensational men's adventure art of Bruce Minney. The men's magazines offered a spicy mix of half-clad women, Nazis, lions, alligators, guns and explosions—plenty of grist for social historians. 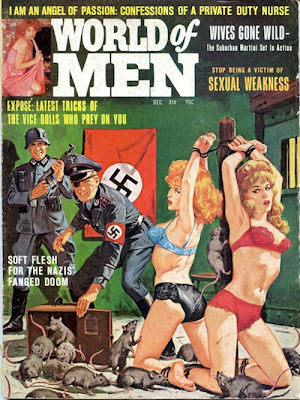 As always, Illustration magazine offers the highest quality reproductions. In the case of Minney, there are 69 images, taken from both originals and printed pieces. The examples span his career, including his later work in paperback genres of historical romance and gothic horror. Contemporary illustrators will appreciate the fact that the article includes some of his preliminary sketches and photo references to show his process. 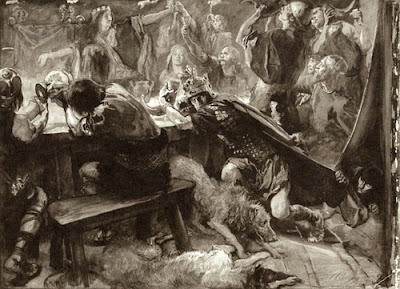 The other major article in the new edition of Illustration is about Edwin Austin Abbey (1852-1911). I mentioned him recently on this blog as the artist who painted Richard III and many other scenes from Shakespeare. Here is a scene from Macbeth: "There's blood upon thy face" (Act III, scene iv) 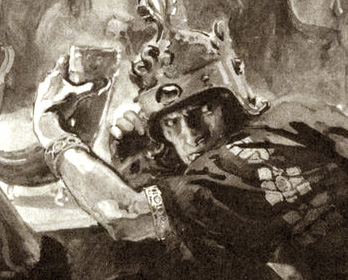 Originally from Philadelphia, Abbey, moved to England and worked closely with John Singer Sargent and Lawrence Alma Tadema. Beloved in his day and rather obscure now, his images were painterly, evocative, and authoritative. He amassed a costume collection that would have been worthy of a theater company. To see more of his work, follow any of the three links below:
------
Illustration magazine website (preview the entire magazine online)
More on Illustration #40 on Matthew Innis's blog Underpaintings
More on Abbey on Muddy Colors blog
Previously on GJ: Richard III by Abbey
You have just read the article entitled Illustration #40: Minney and Abbey. Please read the article from Sentimental Journey About Golden Age Illustration more. And you can also bookmark this page with the URL : http://sentimental--journey.blogspot.com/2013/03/illustration-40-minney-and-abbey.html